Description:
Supported by four carved and curved legs, like the lower part and the uprights. There are three drawers in the rounded front. The mirror rests on the alabaster top, with a frame carved with phytomorphic curl volutes, entirely gilded.

Chippendale style:
Predominant style in the furniture of the English in the second half of the Eighteenth century (with influence on North America and Germany and the Netherlands), by the name of the stipettaio Thomas Chippendale was born in Otley (Yorkshire) in 1718, died in 1779 in London. In 1749 Chippendale, whose father had been a pure manufacturer of furniture, opened a store in London, and in 1754 he published the work that marks a milestone in the history of furniture English, "The Gentleman and Cabinet Maker's Director", the codification of national forms already existing, and together with the collection of new inventions, decorative characterized by the wide eclecticism (reasons the French Regency and Louis XV styles, patterns, chinese motifs and gothic). The originality of the Chippendale consists above all in having been able to assimilate with exquisite taste the various reasons to the traditional lines of the furniture of the English, thus lending classic style to this furniture in his elegant features that are already reflected in the characters of that elite class of which he was the exponent, J. Addison. Date this originality relative Chippendale (he was not the highest expression of the tendencies that are widespread in the cabinet-making English of the Eighteenth century), not surprisingly has extended the designation of Chippendale furniture manufactured by others, both before and after the publication of the Director. The son of the Chippendale continued the art of the father by associating himself with Thomas Haig (the company Chippendale, Haig lasted until 1805), and then only until 1822; many of the furnishings were executed from the designs of the architect R. Adam, that is, belong to the final phase, the neoclassical furniture of the xviii century. With the Chippendale style came to perfection in the workmanship of the mahogany, exotic wood came out of fashion around 1730. - The Chippendale style is named after a famous English manufacturer of furniture of the ' 700. Thomas Chippendale was born in 1718 to the middle of the EIGHTEENTH century designed the first furniture of the Rococo style, sometimes with the addition of oriental decoration, and finally the furniture from the neo-classical taste, his output was wide-ranging, producing furniture still expensive and elaborate but also of the common ones and, for a time, cheap. From the date of his death in 1779 the production passed into the hands of the born in 1749 until the beginning dell'800 produced mainly furniture neoclassical. Still today, some of the production of dining rooms, bedrooms and other pieces of furniture of the 40's are defined for the forms in the Chippendale style. This style is, chronologically, susseguito to the Art Deco and art nouveau. 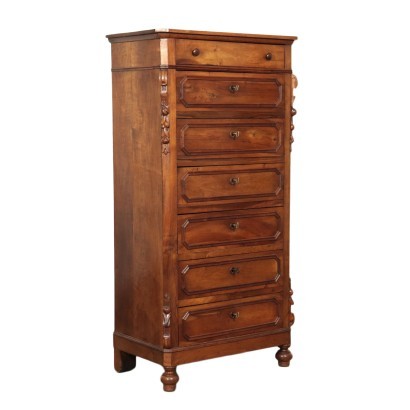 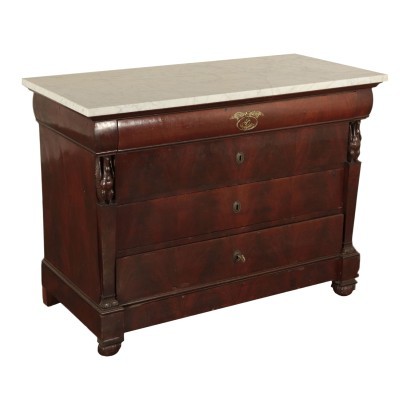 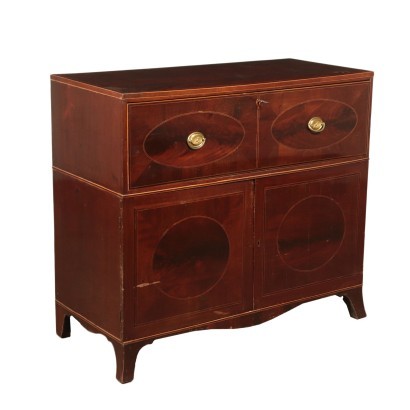 English production mahogany cathedral veneered chest of drawers with marple threadings. Two lower doors that hide three drawers while the uppe drawer can be opened by folding it and hides drawers and open compartments with neo-gotic arches. 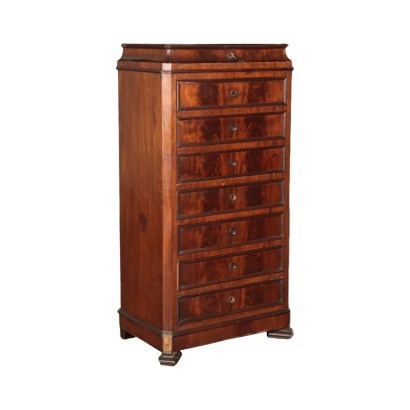 Umbertine chest of drawers supported by framed feet; 45° pillars. / frontal drawers surmounted by a smalle one hidden by the undertop band that follows the shape of the gorge. Walnut and Walnut burl. 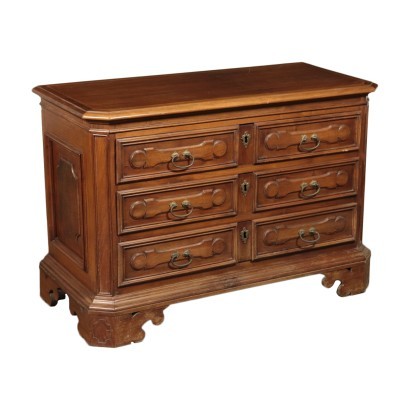 Walnut chest of drawers made with old woods. Supported by shelf feet. It has 3 drawers decorated with engraved frames. Engraved frames and reserves alson on the sides; the pillars ar at 45° 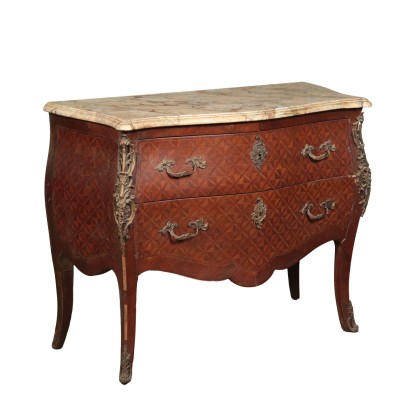 Chest of drawers in Style

Chest of drawers in Style

Dresser with double plays on the front and on the sides. pair of drawers and wavy legs, Merqueterie veneered. Bronze decorations. 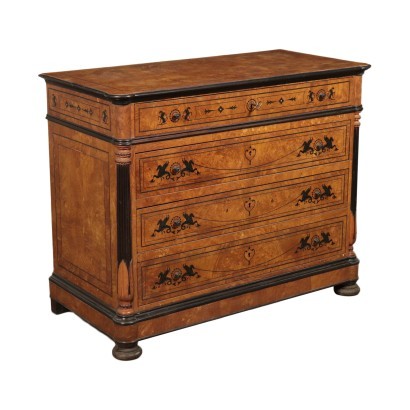 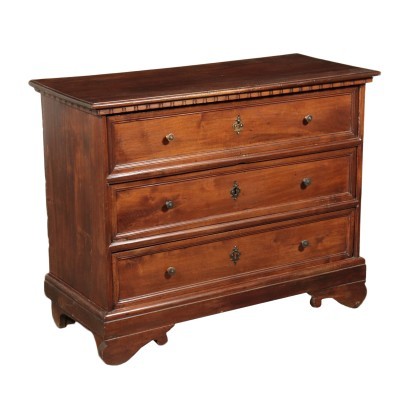 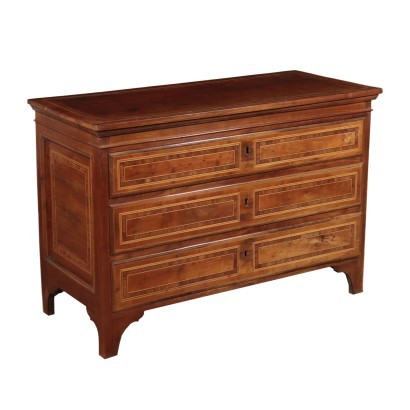 Chest of drawers supported by shelf-shaped feet; 3 frontal drawers. Cherry; it had been modified later: various essences threadings had been added on the front of the drawers and on the sides. 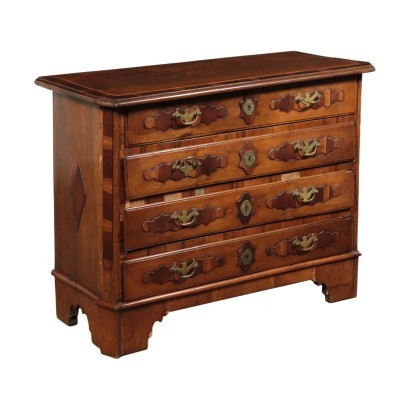 Chest of drawers supported by shelf feet; 4 frontal drawers that, along with the 45° pillars and the sides, are embellished with relief laburnum reserves; british nozzles. It had gone through restoration works and it had been modified. 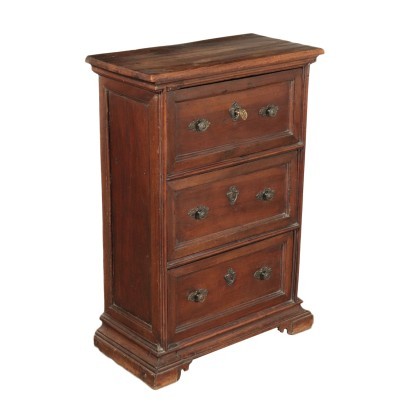 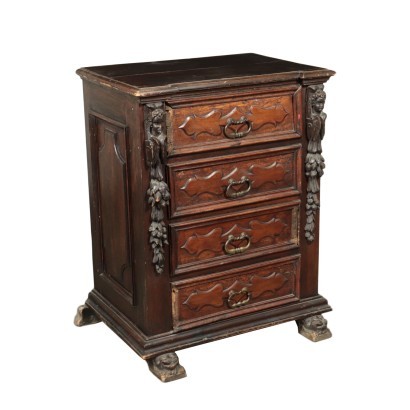 Supported by small feet of which the frontal ones are leonine-shaped; 4 frontal engraved drawers. Pillars are engraved with leafy festoons and two putti that act as telamons. Made usign ancient parts. 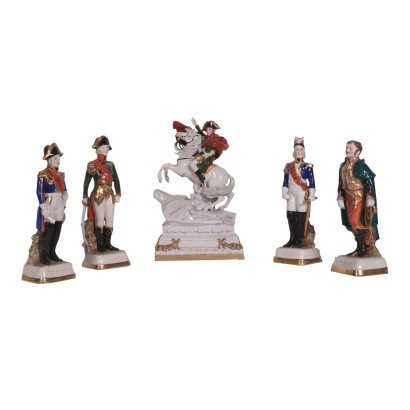 Group of Capodiamonte porcelain statues representing Napoleon riding a horse and 4 soldiers. The soldiers' statues are from the early 20th century, Napoleon is from mid-20th century. Manufacture's Brand under the bases. 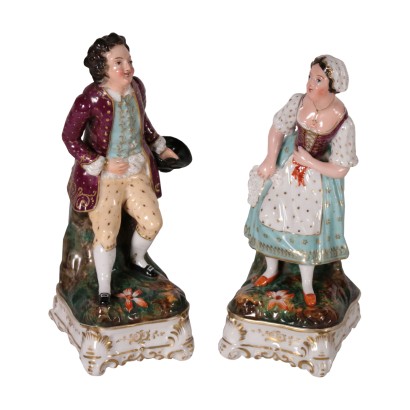 Pair of statuettes, perfume bottles, porcelain with polychrome, with rich decorations in gold. Below the engravings, which refer to the manufacturing of Jacob Mordecai (known as a Jacob Petit). 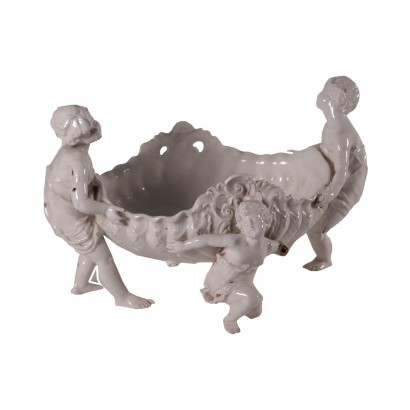 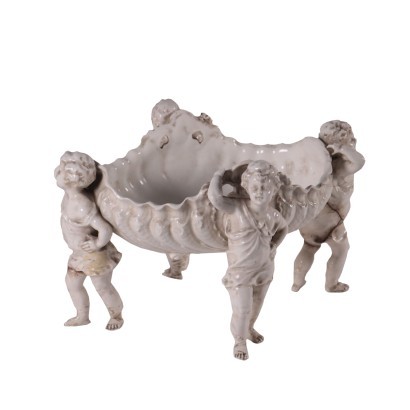 Majolica ceramic upstand with 4 putti that support an elonged bowl. 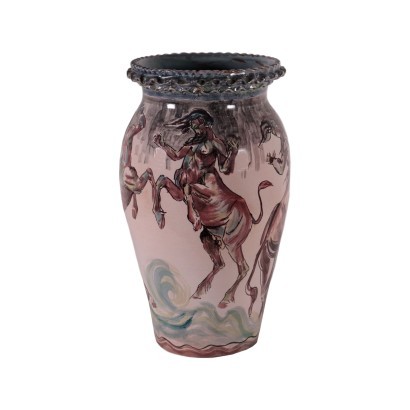 Polychrome glazed ceramic vase with mythological figures draw all over it. 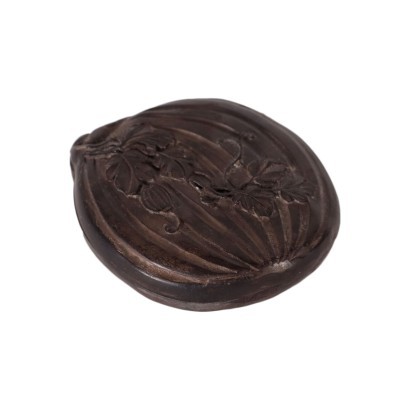 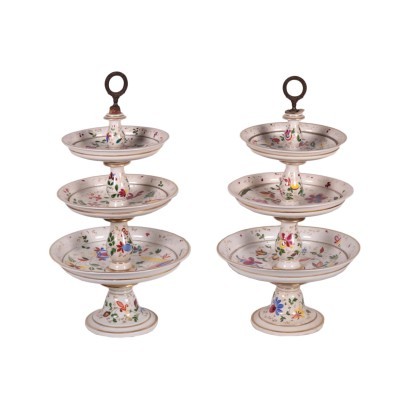 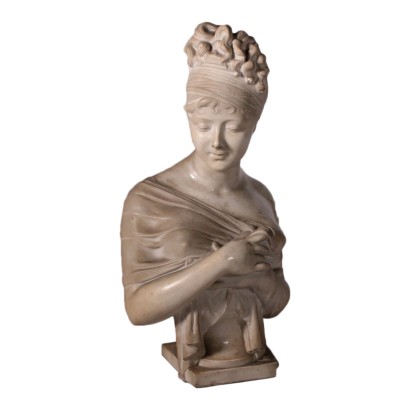 Bust in white marble depicting a young woman with classical robe and hairdo. The draping, the way, the robe adheres to the body, the posture, the decor on the headgear and all the other small details enrich the sculpture and reveal the ability of the artist. 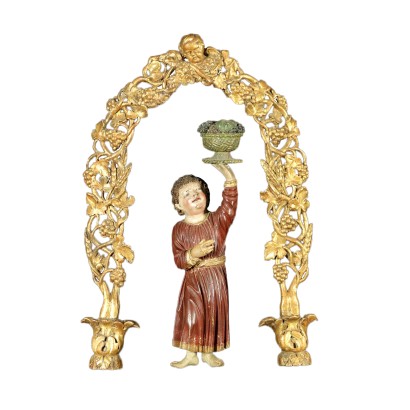 The figure is carved with the frame of the portal

The figure is carved with the frame of the portal

The figure of the innkeeper, is carved in the round and painted in polychrome, inserted in a portal carved vine shoots with vine leaves, golden gouache of a later period. The sculpture represents a host in the act of carrying a basket of fruit. The sculpture is well defined with a twist and expressiveness in the face. Shows an influence nordic; it is completely painted in polychrome, is clothed with the purple edges and belt, gold and green basket with branches of black grapes. The portal, which probably added to the end of the XVII century., it is made with vines that twine, creating a time of acute, starting from the two great heads of the baroque and ending in a face of the winged cherub. This part, probably born to a religious subject, is completely golden.

The bust portrays a noble woman, richly dressed. Certainly a portrait, as can be seen from the detailed physiognomic characteristics of the face; the depicted subject has a stern gaze and attitude, an element that characterizes the portrait sculpures of the time. The hair are tied on the back of her head in an elaborate hairstyle with braids. The neck is adorned with a necklace with a medallion in the centre and multiple strings of pearls. She is wearing an off-the-shoulder dress, refined with a thin lace hem and a bow in the middle of her chest. The sculptor has great skills with the use of a chisel to refine details and the texture of fabrics. 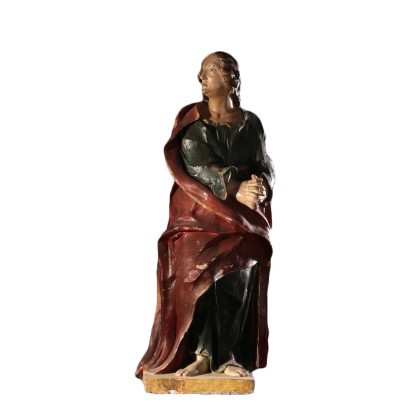 Polichrome terracotta sculpture representig St. John Baptist with clasped hands and contrite attitude. He has long brow hair and his painful face is raisd and turned to the left. He is wearing a blue tunic with gilded hems and belt and a vermilion cape, also with gilded hems; the drapety is rendered in a plastic and sharp-cornered way. Not refined back that shows the supporting structure that means that the sculpture was supposed to be placed against a wall or a support. 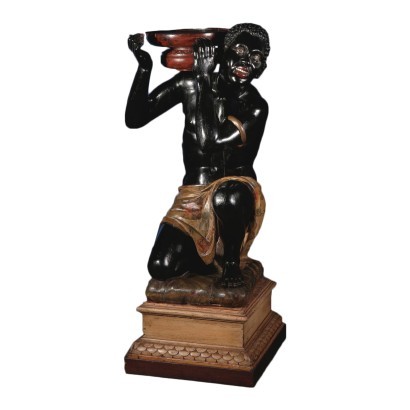 Ebonized walnut sculpture representing a vase-support Moor kneeling on a base painted with a pretend fabric to emulate a pillow. He is wearing loincloth painted with polychrome floral patterns; he's wearing a brass bracelet on his left arm. He is holding a vase-supporting surface on his right shoulder helping himself with both hands; the bent arms shows the fisical effort. His calm face is looking up.