Description:
Ope desk supported by feet; latera doors surmounted by a pair of drawers and a bigger one in the middle. Cherry wood decorated with Liberty inlays; the top has a glass insert. Needs to be restored.

Product Condition:
The item shows signs of wear due to age. Any damage or loss is displayed as completely as possible in the pictures. It may require restoration and recovery of french polish. Product with a Certificate of Authenticity and Lawful Origin. 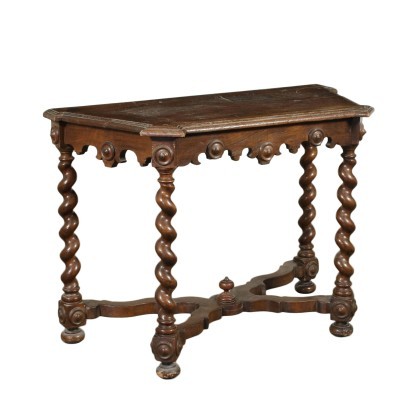 Spanish baroque console, supported by legs with the features of twisted columns, in the lower part they have nuts that act as connecting elements for the moved crossbars, in the center an element carved in a pinnacle. The apron is carved with shaped motifs and adorned with studs. 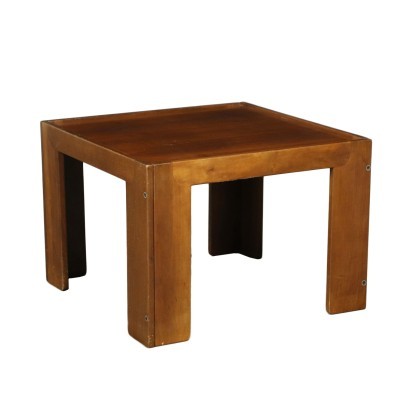 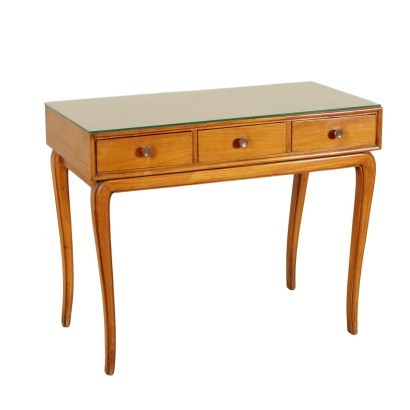 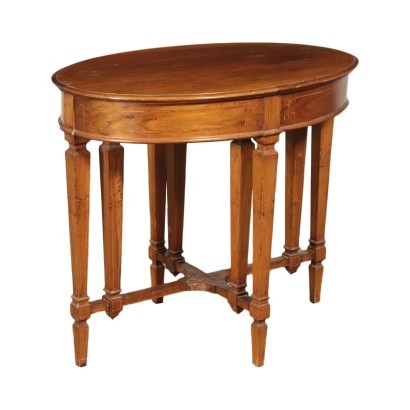 Supported by 4 pyramidal truncated legs tightened by a collar on top and with a lower dice that connects the crossbeams on which stand the other 4 pillars that have a similar shape to that of the legs. Walnut with ebonized wood and marple threads. 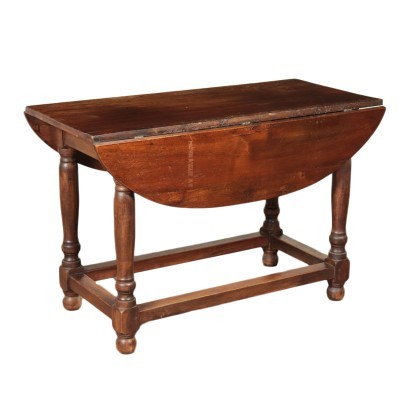 Supported by 4 refined legs connected by crossbeams; the top was made with ancient woods and it has two lateral wings that extend the surface. 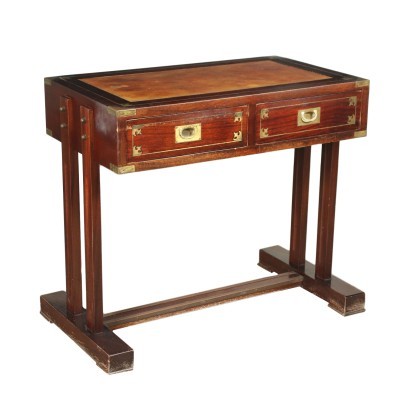 Writing desk in marine style, in the undertop band it has a pair of drawers; in mahogany, it is adorned with brass frames, the top has a faux leather insert. 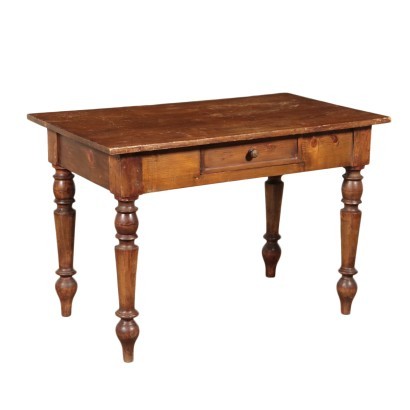 Table supported by four turned legs in poplar wood, ending in pear-shaped feet. It has a drawer in the undertop band, in fir, as well as the top. 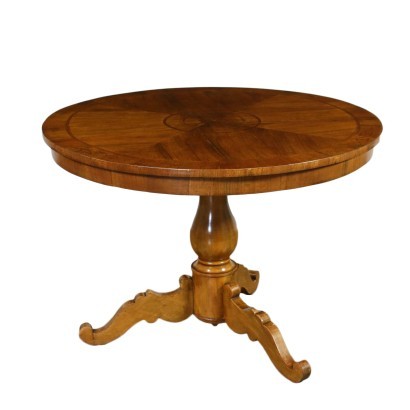 Louis Philippe style table, supported by a turned central baluster with three wavy legs ending in a curl. In walnut, the top has phytomorphic maple inlays and a rose window in the center. 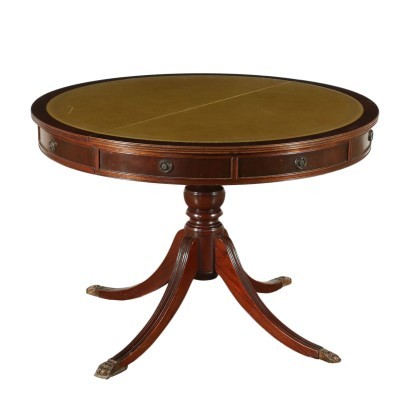 English extendable desk, supported by a central turned baluster with four saber legs with brass lion feet. The round top has a faux leather insert and is extendable, thanks to extensions supported by retractable turned legs. 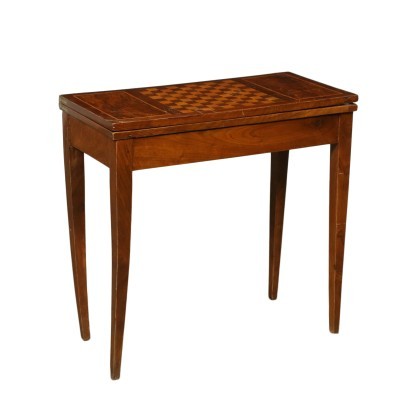 Small revival game table supported by pyramidal truncated legs; the top can be open and hides a compartment underneath in which there is an ilaid chessboard. Walnut. 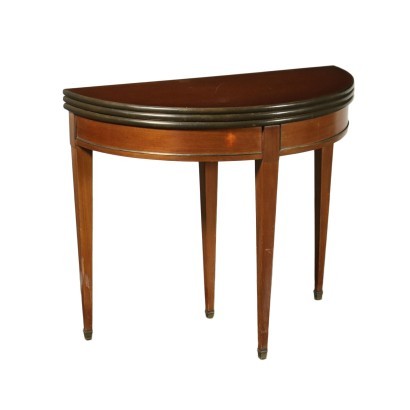 Table supported by pyramidal legs of which the pull-out one in the back acts as support for the folding top. The top can be open and used both as a writing desk or as a game table with a green cloth insert. Cherry veneeredwith brass frames and tips. 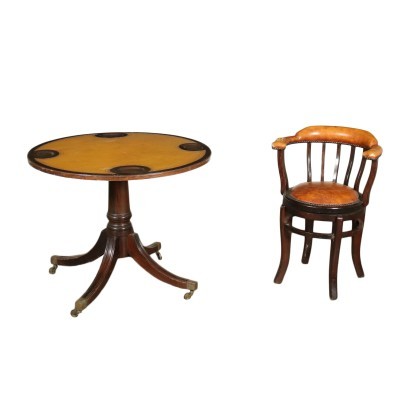 Small game table supported by a central balustrade with 4 legs with wheels; mahogany; the top has a faux leather inserts with small compartments, Chair supported by 4 curved legs that are connected by a crossbeam; padded seat and backrest's band. 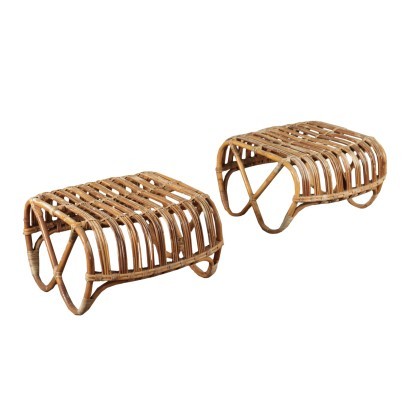 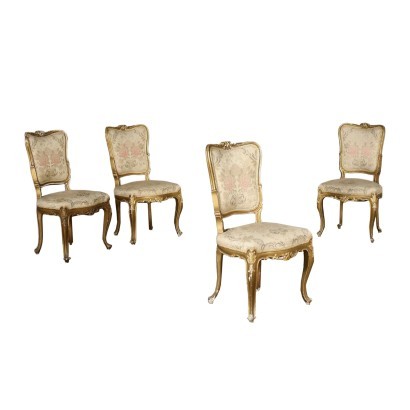 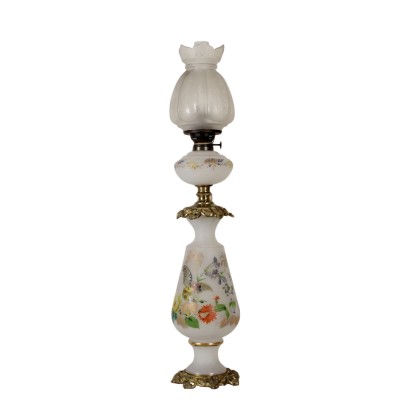 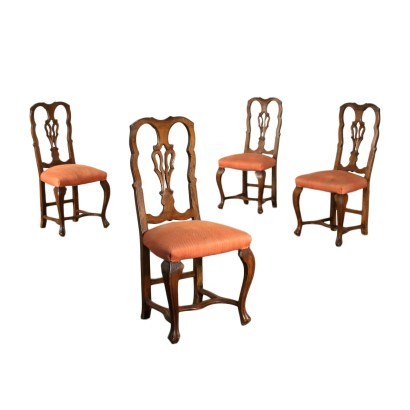 Group of four chairs in style, supported by legs of which the front ones are moved, connected by crossbars, also moved. The seat is padded, while the open back is carved. 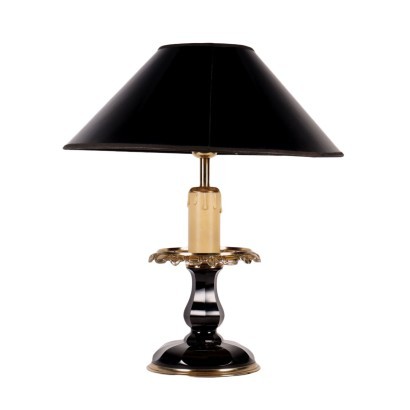 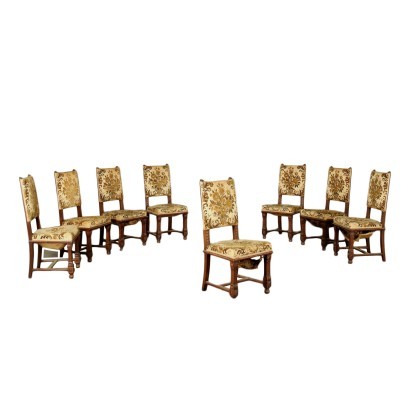 Group of 8 Neo-Renaissance revival chairs supported by engraved frontal legs that are connected to each other by crossbeams; padded seat and backrest. 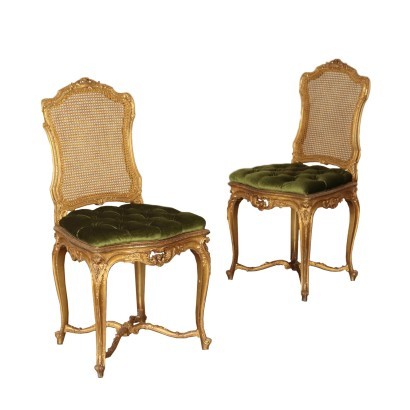 Pair of ROcoco revival chairs with strong references to Louis XIV's style mostly on the cross vault that connect the two curved legs. The seat and the back are finelly incannuciated; on the seat there is a removable padded pillow. The engraved wood has a double gilding, shiny and matt. 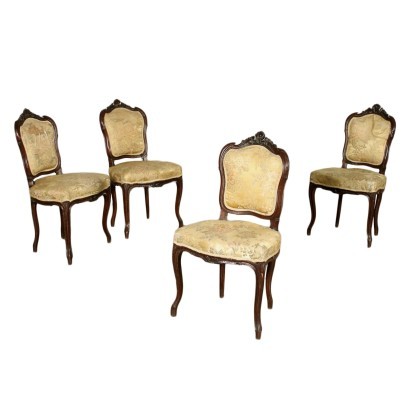 Group of four Barocchetto revival chairs supported by curved and carved legs, baroque taste carvings are also present in the lower band and in the shaped profile of the backrest, culminating in the cimasina. Upholstered seat and back raised. 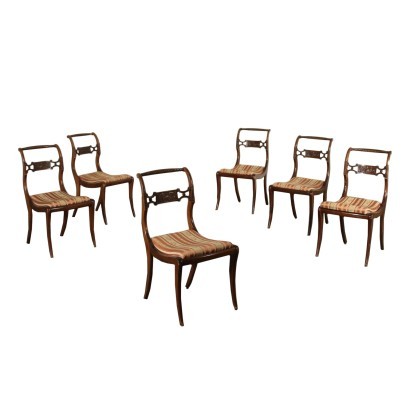 Group of 6 Neo-Classical revival chairs with saber-shaped legs, concave padded seat and back with an openwork engraved with phitomorphic motifs. Mahogany. 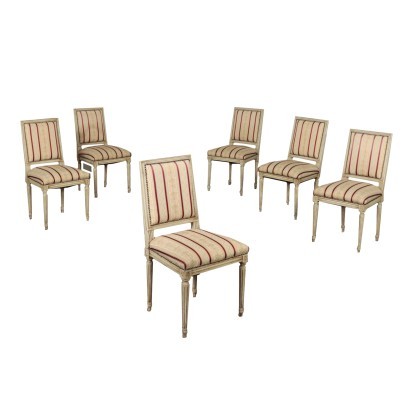 Supported by four turned and tapered legs with cube carved in pink; seating and seatback are padded. 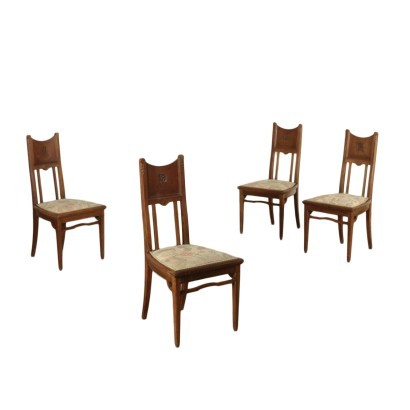 Group of 4 liberty chairs supported by saber-shaped rearlegs; mahogany, padded seat and open back decorated with engravings on the upper part. 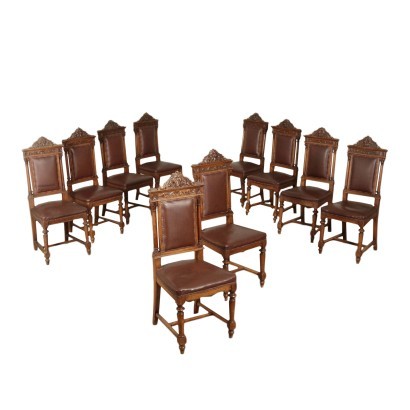 Group of ten chairs in neo-Renaissance style, supported by four legs, the front ones are tirned, while the back ones are sabre-shaped, connected by h-shaped stretchers. The seating is padded and upholstered in leatherette set with upholstery nails, like the central part of the backrest, framed between two turned columns that support a trabeation carved with leaf spirals and a cymathium with a grotesque mask.