Paintings, drawings, collages, silkscreens, lithographs, sculptures, posters of Italian and international artists: in this section all the works of Contemporary Art sold in our online catalog. 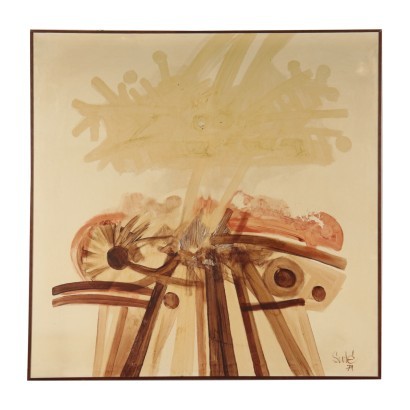 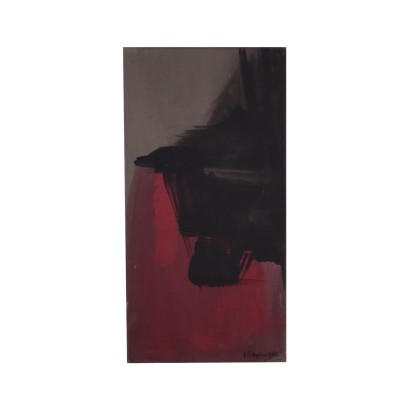 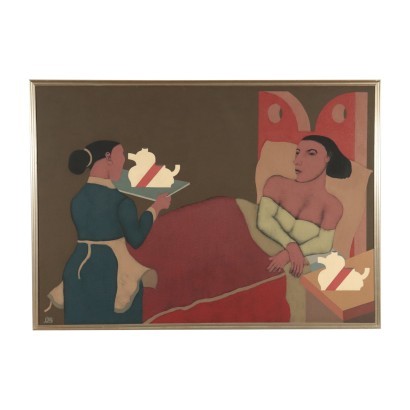 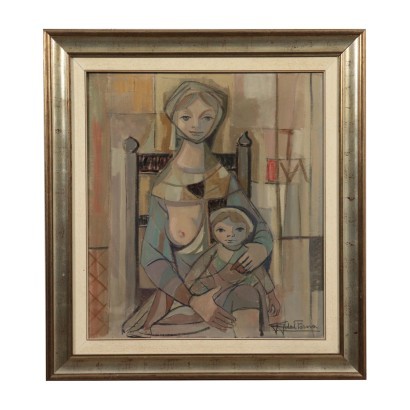 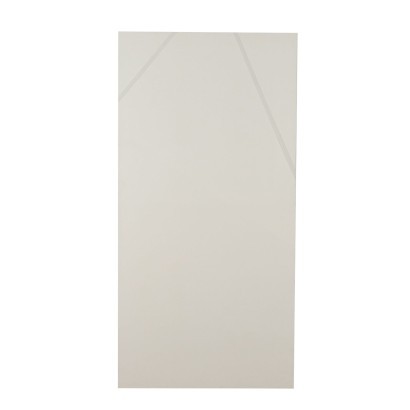 Mixed technique on cardboard, mounted on a wood structure. Abstract piece, it is consists of a large plywood panel painted white, on which two white elastic strings and a white strip of paper are attached. This piece by Tamas Jovanovics, Hungarian artist already established in Europe and abroad, is part of his line of research of the interactions and mutual influence between light and colour. It begins from black, as the absence of light, it goes through different ranges of colours presented according to really regular geometric lines, and it ends in white, pure light. In the abstract essence of this piece, he wants to give space to the primary sign and linear geometry, to reach the intangible ecstasy of colour becoming light. The piece comes from an exposition in the cultural centre of S. Fedele in Milan. 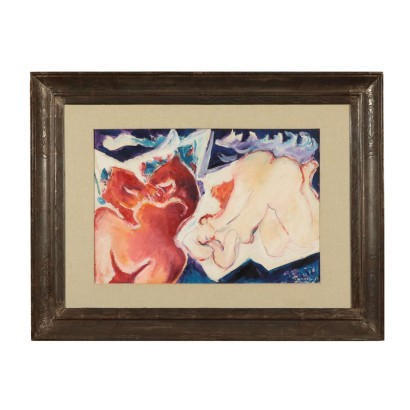 Oil on canvas. Signed and dated bottom right. Additional signature and date on the back, title on the frame. It also features a stamp of provenance with authentic signature from the "La Barcaccia" Gallery in Rome. Pignon was the son of miners, he moved to Paris in 1927, and worked as a construction worker and litographer, he attended evening classes and the Association of revolutionary artists and writers; in 1936 he met Picasso, with whom shared a deep friendship. Involved in the Resistance, he took part in the Salon de la libération in 1944. All of his pieces, from the thirties, with bright colours and strongly built volumes, to those after 1948, with more fluid strokes but charged with expressive violence, are always in touch with objective reality, represented in never descriptive shapes, spaces and movements. Next to the themes of social inspiration, he also developed different themed series: Olive Trees, Cockfights, Heads of Warriors, Harvesters and Nudes. This piece belongs to the "Beaches" series. Framed. Comes with autenthication on photo. 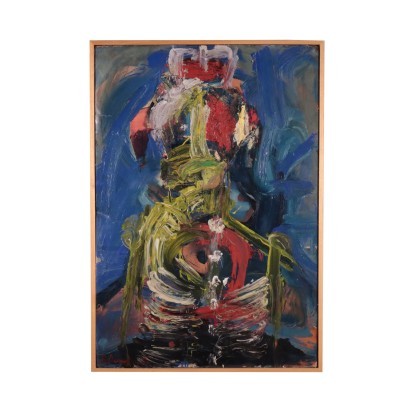 Mixed media on cardboards applied front and back on styrofoam. Signed on the lower right corner. Label with title, catalog number (N.6935) and douple stamp of the Michelangelo Gallery of Bergamo on the back. Bernard Damiano was born in Coumboscuro, an alpine zone around Cuneo, and during his adolescence he got closer to art becoming firstly a carver of wood sculptures and then discovering drawing. From 1946 he frequented the artistic environment of Cuneo taking lessons from Giulio Boetto and attending the Albertina Academy and the artistic environment of Turin. After moving to Nice in 1951 Damiano decide to dedicate himself only to the artistic career so from 1960 to 1965 he focused on painting working and exposing in France, Italy and all around Europe. Bernad Damiano is an impressionist painter that attack the canvas with colors to express his stong personality conditionated by his life experineces. Framed. 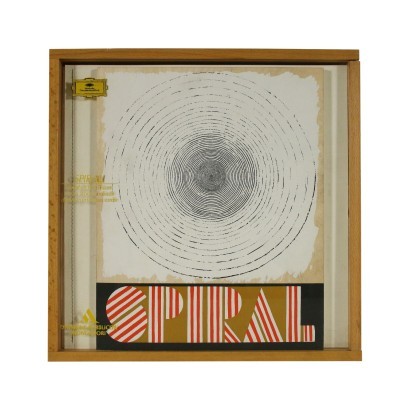 Multiple screen printing, Tilson's name, label with title and declaration " Multiple screen printing for Mondadori". The art piece is displayed in a case that also contains a small volume " about stringed instruments" with Gillo Dorfles' preface and 4 diskc of Deutsche Grammophon. Joe Tilson was a british sculpter and painter that studied at St. Martin's School of art and at Royal college of art of London. He lived in Itlay until 1957 where he won the Prix of Rome (1955); after he teached in several british art schools and at the School of Visual Art in New York (1966). He was one of the main exponents of the british pop art. He tested several materials ( paint, wood, arcrylic glass, etc.) and techniques (from collage to photomontage and engraving) getting in 1960s to original pieces as the serie of paintings and constructions inspired by interlocking games for kids ( Key-box, Spiral-box, etc) and by the ziqquart theme. Tilson's art pieces ar at the Tate Gallery of London, at the Museum of Art of Sao Paolo, at the Kunsthelle of Brasilia, etc. 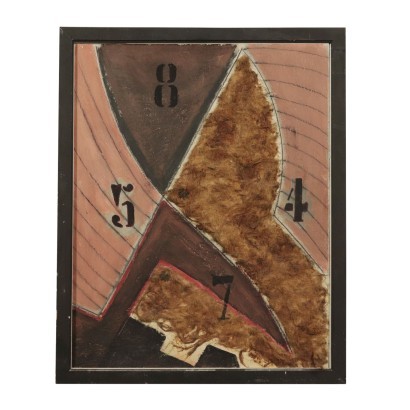 Decomposition of Surfaces in Space 1990

Decomposition of Surfaces in Space 1990

Mixed media on hardboard. Signature, title and date on the back. Max Marra was born in Paola (Cosenza) and now lives and works in Lissone (Monza). Multidisciplinary artist that in 1980s focused his research on drawing, painting and sculpting using strongly communicative materials that were related to the artistical language of the historical avant-garde. He often exposes in national and international expositions but several are also his personal expositions at pubblic institutios, private gallerues and abroad. Framed. 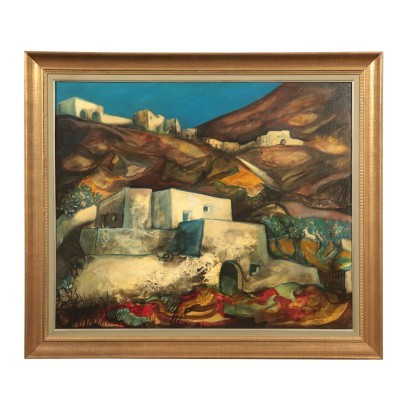 Oil on canvas. Signed and dated bottom left. Additional signature, date, and title on the back. Fulvio Platinetti, born in Tollegno, small town near Biella, was always a loner, in life as in art. Even if his paintings coulb be considered neorealist, he distanced himself from every influence, even at the expense of economic sacrifices and popularity, refusing to adhere to any painting movement, to avoid "falling in the homogeneity in which many fell". In the 50s, looking for places to be alone, he discoverd Sardinia first, then Lipari and Stromboli, that became the places for his soul, accompanying him, as privileged subject, along his journey from that moment on. Framed. 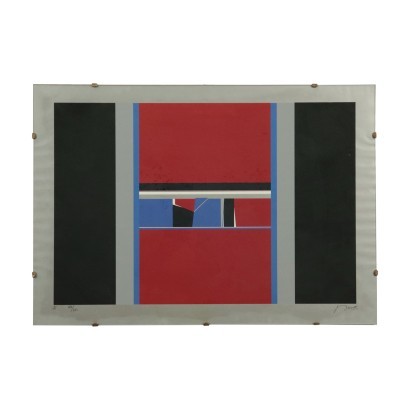 Colored screen printing. Signed on the lower right corner. Numeration N.68/250 on th lower left corner. Jean Baier was a swiss artist that expressed in his art pieces his fascination for the geometrical shapes thaat where precisely outlined by marked corners and lines made with a minimal chomatism. The art piece comes with authenticity certificate released by the Pauli Gallery of Losanna that guarantees the limited edition for the Financiere et de Dredit company of losanna. Framed. 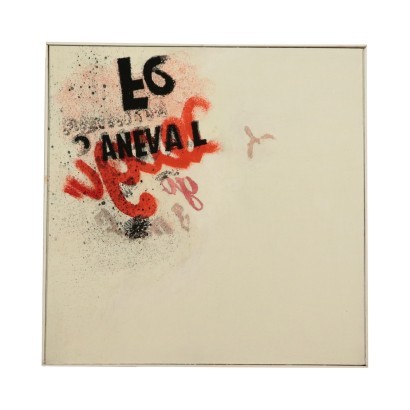 Mixed media on board, Signature, date and title on the back. Paolo Barrile is a behavioral environmental artist. He lives and works in Milan. He started in the cinema world producing short films, documeraries and writing articles. Since 1952 he got closer to painting . His production can be divided into different periods that had been callade with specific names. The painting in question belonges to the period of " Writings and graffiti". Displayed in frame. 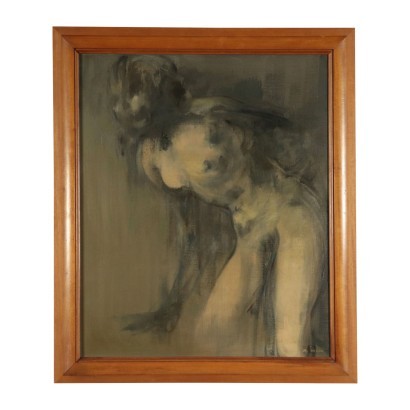 Oil on cavas. SIgned on the lower right corner. Title and signature on the back. Giuseppe Ajmone, artist from Valsesia who studied at the Brera Academy of Fine Arts in Milan, had been one of the firmatories of the Manifesto of Realism in 1946. Along with still lives and landscapes, during his first artistic period, Ajmone was very interested in nudes that represent most of his pictorical prodution from 1960s until todai. Framed. 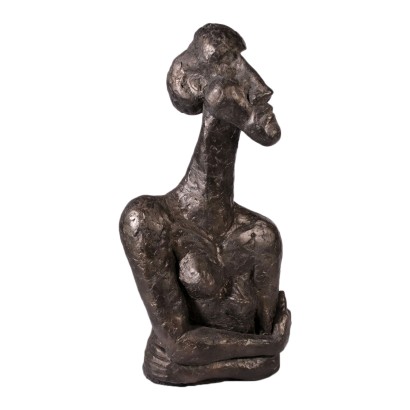 Clay sculpture. Signed down on the back. Otto Gutfreund was a czechoslovakian sculptor that after studying in Prague and Paris, became famous around 1910s for his cubist styled sculptures. After taking part to the First World War he moved up to a more realistic style following the period of " return to order" after war that characterized also arts. His sculpting prodution, mostly bronze made, also availed itself of clay and ceramic using. 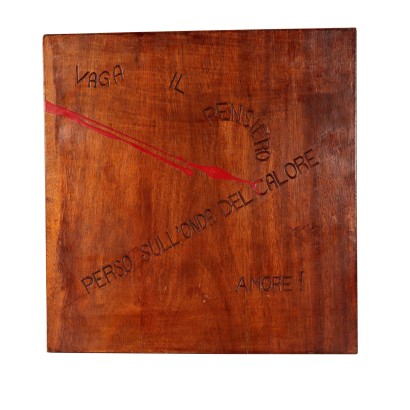 Work of Ugo Carrega, Engraving and Enamel on Board, Contemporary Art

Work of Ugo Carrega, Engraving and Enamel on Board, Contemporary Art

Engraving and enamel on board. Signature and date on the back. Carrega was a poet and artist from Genoa but active mostly in Milan, one of the main exponents of the visual poetry even if he prefered to call it "New Writing" that is an experimental writing that puts together different signs of extraction. He also founded in 1965 the magazine "Tool: symbolic writing notebooks" that is an experimental poetry in which signs of differen nature, oral and graphic, act equally. The piece in question is an example of that idea of art. 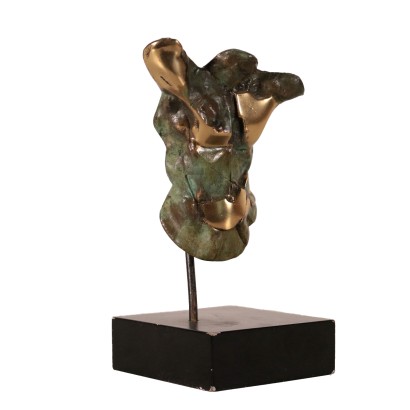 Bronze sculpture depicting bust of a male figure on a wooden base coated black. Bronze, partly gilded. And. 117/120. Signature of the author incussa. 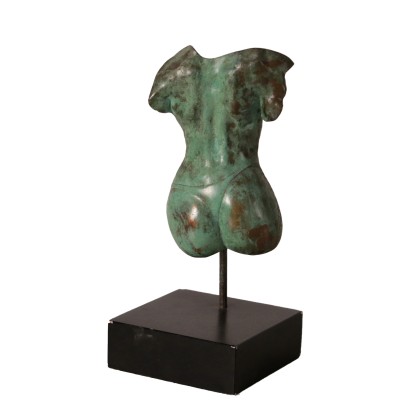 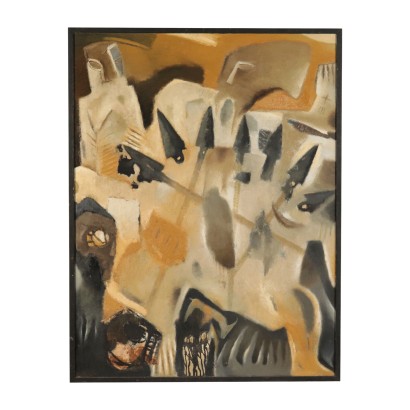 The composition with the blades,1997

The composition with the blades,1997

Oil on panel. At the back there is the label of the Galleria d'arte Bergamo, l 'exposure with the title "things hidden" in January 1998, bearing the title and date of the work; there is also the monogram of the artist inserted with the date in the cross. Sergio Battarola, born in Bariano (BG) in 1955 and graduated at the Accademia di Brera, it is revealed to the attention of the public and of the critics in 1989, with an exhibition of 33 drawings presented by Giovanni Testori, in the Company of Design of Milan. He has exhibited in several personal exhibitions in different Italian cities. The table is presented with the frame. 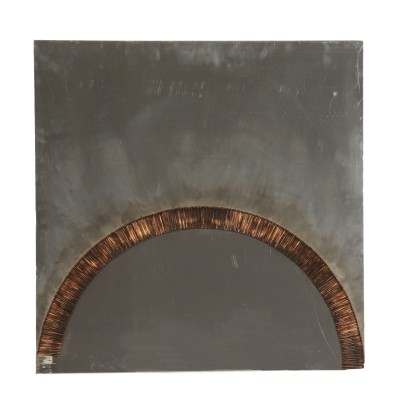 Application of burnt matches on metal cardboard. On the back ther is the tag of the Centro Gallery in Brescia with work's data and artist's signature. Aubertin is considerated the "monochrome painter" that focused his artistic researches above red colore, meant as fire, energy: from 1958 he started makink his famous red monochrome canvases, known as Tableaux Feu ( Fire Paintings), animating them with various elements such as nails ( Tableaux Clous), metal wire (Tableaux Fil de Fer), metches (Parcours d'allumettes) and several material such as candles, nets, iron nets. In his metaphysical conception of painting he meant to traspose soulk's energy, spiritual being, on canva through the color red. Startin from 1960s Aubertin introducted in his repertory also fire, physical manifestation of his red color. He made several abstract compositions using matches that , onece fired up, created spontaneous variations made by the flame. Between 1980s and 1990s his artistic prodution turned to performances in which himself burned pianos and cars, while in the last years of his life red was replaced with white, black and gold. The board comes along with authenticity released by the Archive Bernard Aubertin' Works. N. Archiving DFEA47-1000237523. 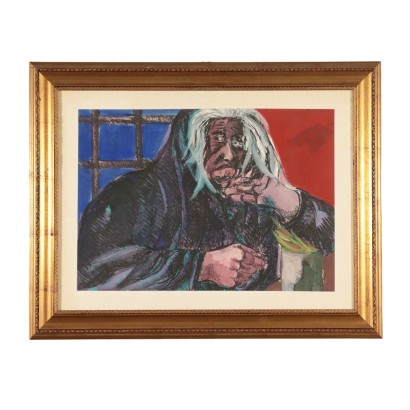 Tempera on paper. Signature, title and dedication on the back. Saverio Terruso is a Mediterranean painter culturally and emotionally attached to Sicily - his land of origin. He counts a wide rage of paintings among his production that convey the authentic fascination for a rural world which is about to disappear definitively. His paintings depict mostly rural characters such as farmers wearing the coppola working or eating in a restaurant or melancholic women wearing their scarves during the daily activities or processions. His painting technique is characterized by dramatic tones with strong deforming tensions and very bright contrasting colors. The drawing is very dramatic both in its colors and shapes with the aim to convey the strong emotion of the tragic event it recalls (an earthquake). In frame.