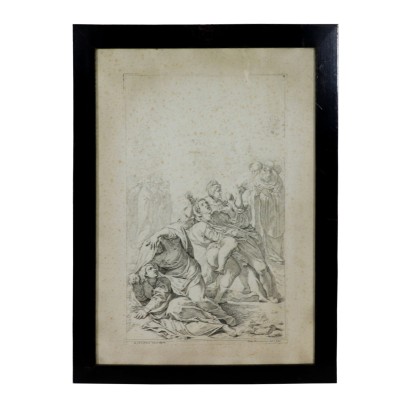 Etching. In the bottom right, the engraver's name, in the lower left, the name of Ludovico Carracci, the author of the drawing. The etching belongs to the series of 20 sheets made by Giovannini and published at Bologna in 1694, by Marc Antonio Fabbri with the title: "The Cloister of S. Michele in Bosco". The publication, containing the life of st Benedict painted between 1603 and 1604 in the cloister of the convent of S. Michele in Bosco at Bologna by Ludovico Carracci and some of his students of the Academy. The work presents the different stains of humidity. In the frame. 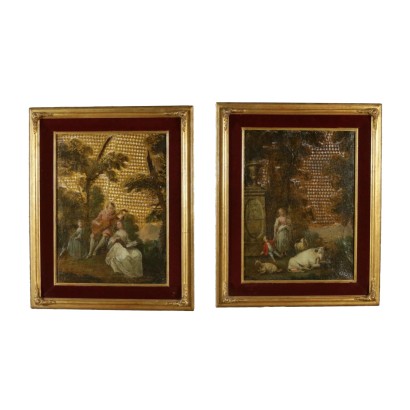 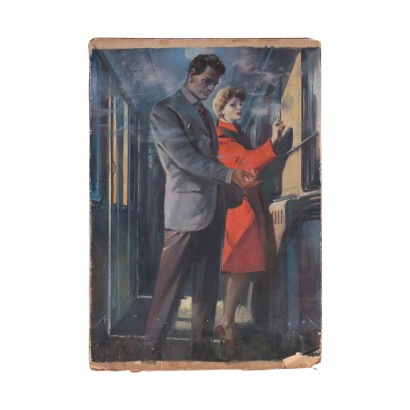 Illustration of the tale "the Thorny journey"

Illustration of the tale "the Thorny journey"

Mixed technique on paper applied on cardboard. Signed Albert in the lower right. At the back there is the title, which identifies the scene as an illustration of the story "Thorny journey" written by Giorgio Scerbanenco, the famous writer ,essayist and journalist (1911-1969) origin ukraine, author of numerous tales of character, a detective story. L' illustration proposal is probably part of an illustrated book, as it is also deduced from the inscription at the back "News 42". 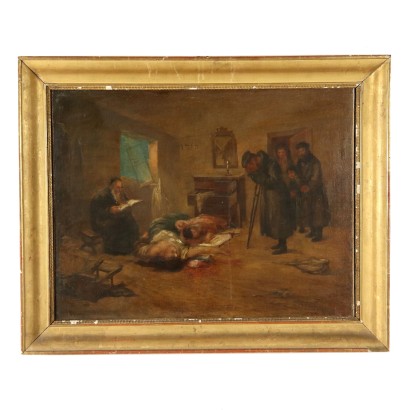 Oil on canvas. It probably depicts a tragic anti-Semitic event. On the right, a wounded soldier in Russian uniform is witnessing the dramatic scene of a slaughtered family while the rabbi is preying for them. The broken window and the upside down drawers make clear that the killers broke into the house. On the left of the mirror, there is a Jewish writing that may suggest the location. The word may be translated as 'Ciro' and may be referring to the areas of Georgia and Azerbaijan near the Kura (river flowing from Turkey to the Caspian Sea, known as 'Ciro' in 1800s). The painting, restored and relined, is presented in a frame of the 1800s. 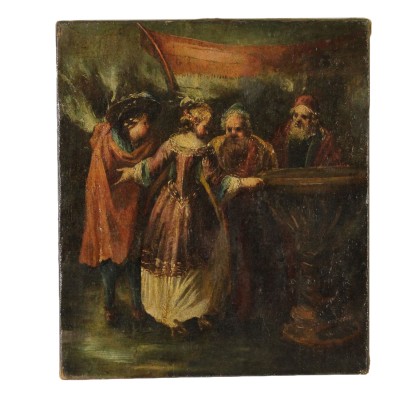 Oil on canvas, School of Ferrara. It seems a sketch of a larger scene set in a church due to the presence of the holy water stoup from which the girl is drawing on. Relined in the 19th century and restored. 17th century. 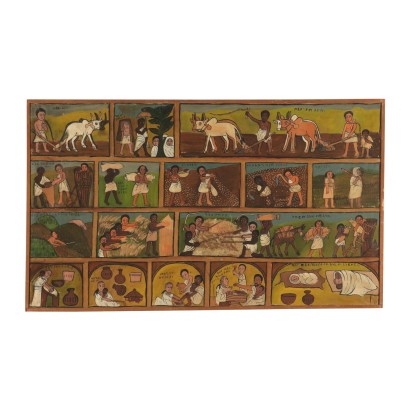 Life in the fields

Life in the fields

The canvas represents the daily life and its flow through the work in the fields, the central element of survival. In the top row we see the first ploughing, followed, after the arrival of the rains, a second preparation of the soil. In the second row, we extract the seeds from the granaries; they are carried in sacks and seeded, with subsequent overlay of a hoe; the row ends with the sprouting of the seedlings. In the third row, the farmer watches over and protects from the wild beasts of the sown; then follows the scene of the gathering and typing, which closes with the store in the granary, the fruit of the work. In the fourth row, a woman prepares in the flour, and bakes a cake; lava and then the walk to her husband and he reciprocates by offering her the first bite of food; the scene ends with the whole family in bed. It is part of a group of seven works, which arrived in Italy at the end of the '30s; were purchased directly on-site , as we have reconstructed from the correspondence and from the family photos, from the lawyer xxx, grandfather of the owners, who was sent as a legal representative of a company of Italian production in 1935 in Ethiopia, and from here it was driven out in 1938 by general Graziani, because it was considered anti-fascist. The paintings remained in the family collection, in the palace of the family, and are now presented in all their expressive force. Ethiopia has a very particular history: it is situated between Africa and Asia, and between the Mediterranean and the Indian Ocean, was a crossroads and meeting point of different cultures, stimulated also by the constant and intense trade flows. Five centuries before Christ, stabilized the dynasty of Aksum; in this kingdom, in the fourth century after Christ, christianity was established as state religion, in his version, the coptic orthodox. The sacred texts of the medieval speak also, however, a direct relationship with one of the ten Hebrew tribes, after fleeing to Ethiopia, from which sprang the royal family through the queen of Sheba. And in fact, in Ethiopia still live today), the line of the Falascià, black jews, whose first historical mention dates back to 600 after Christ. Ethiopia was then a bastion of jewish-christian, with african influences, but to be considered almost the southern edge of the mediterranean culture. 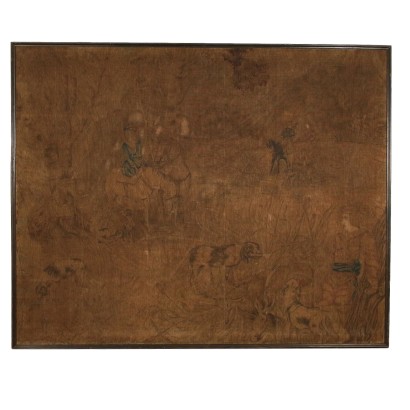 Grass juice. Big hunting scene depicting a deer hunt: on the right a deer is lying on the ground, lifeless, surrounded by the dogs and the servant. On the left a lady on horseback is observing the scene while a horseman is pleasing her. On the background other horsemen are rushing. The painting requires cleaning to resume original colors, dulled by a layer of dust. 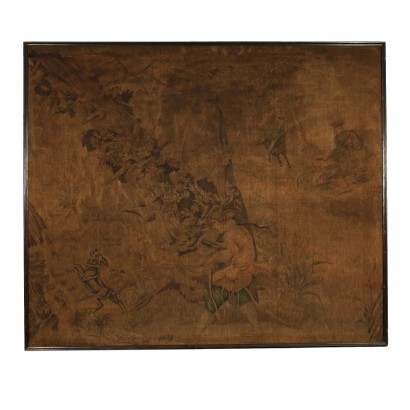 Grass juice technique. The painting depicts a deer hunt: in the forefront a dog is flushing out the animal from the woods, on the right there are hunters on horseback. Grass juice. The painting requires cleaning to resume colors due to the layer of dust. 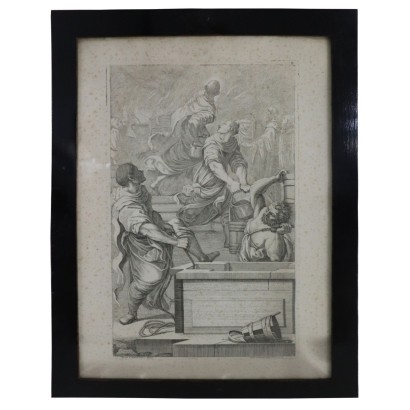 S.Benedetto Puts Out the Fire at the Monastery

S.Benedetto Puts Out the Fire at the Monastery

Etching. Name of the engraver on the lower right corner, name of the drawer, Ludovico Carracci, on the lower left corner. The etching belongs to a serie of 20 sheets realized by Giovannini ad published in Bologna in 1694 by Marc'Antonio Fabbri with the title:" The Claustro of S. Michele in Bosco". The publishing reproduced San Benedetto's stories frescoed bteween 1603 and 1604 in the cloister of San MIchele in Bosco's covent, in Bologna by Ludovico Carracci and some of his students of the Academy. Comes with frame.