Console modern furniture 50's, 60's and 70's, the console in antique with mirror, carved, style: in this section you can find all of the console available in our catalog. 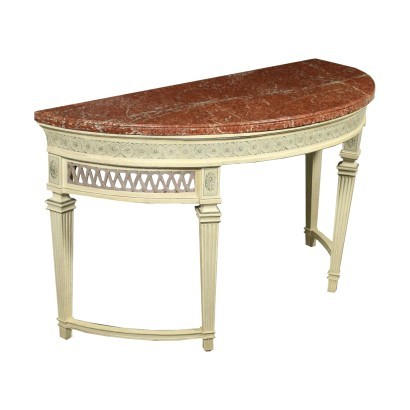 Half-moon shaped Neo-Classical console, supported by truncated-pyramid legs with fluting, tightened on the upper part by a collar and with a connection nut, they are connected with each other by half-moon shaped spindles, perforated with triage decorations on the upper part. Poplar, entirely lacquered and painted, the under-the-top band has a framing with phytomorphic spirals and small roses. The top is half-moon shaped as well and made of red griotte marble. 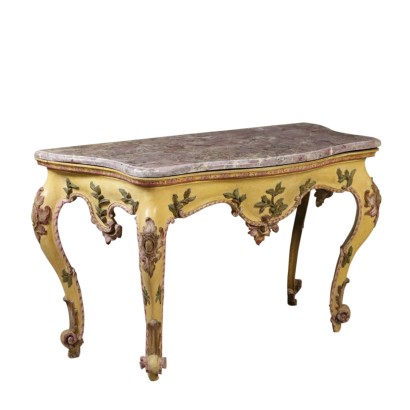 An elegant console table, completely lacquered and decorated in polychromy. Serpentine carved legs with curls and leaves. Serpentine and shaped brand. The top, originally made of marble, has been replaced in a following age with a top with marbling. Manufactured in Lucca, Italy, mid 18th century. 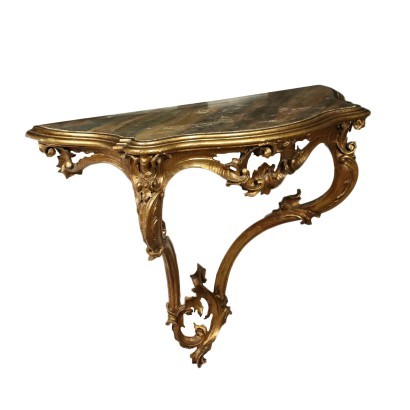 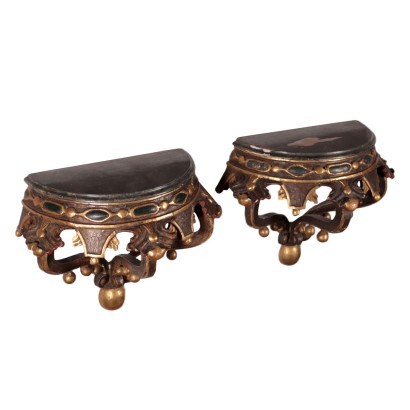 Pair of drop-shaped consoles made with a modified old engraved canopy to which had been added a top surface; lacquered and gilded again. 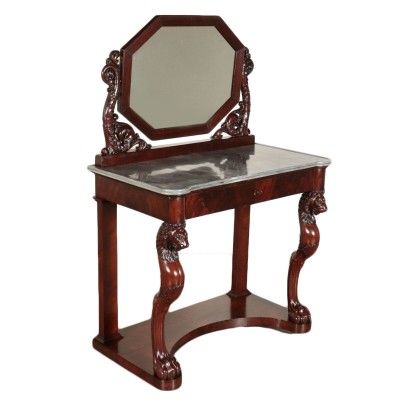 Elegant console supported by wavy front legs finely carved with lion face and feline paws lean on a mixtilineal base. Band with cherry drawer divided into compartments. Framed Bariglio Marble countertop. It has a tilting mirror with octagonal grooved frame holded by finely carved curnucopias. Mahogany pedulle slabbed. Shows the influence of the workshops of the cabinetmaker Peters. 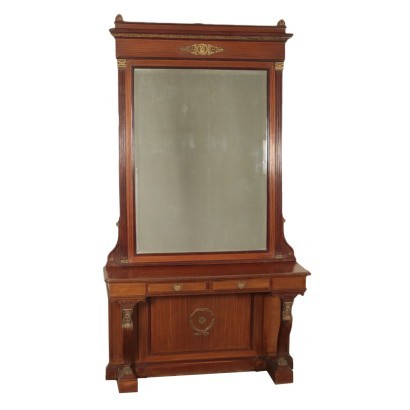 Two curved uprights with lion feet on which two male protomes in gilded bronze are applied support the top, equipped with two drawers side by side in the bottom band. The mirror is framed by two half pilasters that support the trabeation, in which bronze appliquees of empiarial taste were applied, like the laurel crown situated in the middle of the bottom part of the console. 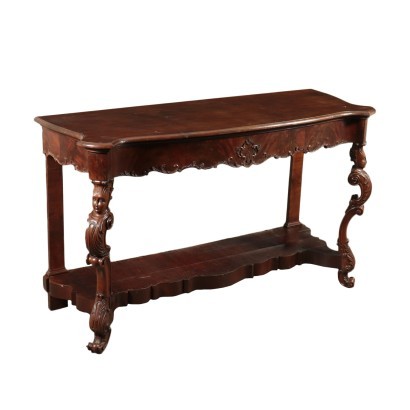 Neapolitan Louis Philippe console supported by 4 pillars of with the frontal ones are curved and richly engraved with leafy elements and caryatids; The legs are connected to a lower moulded surfece. The undertop band is decorated with engraved frames. 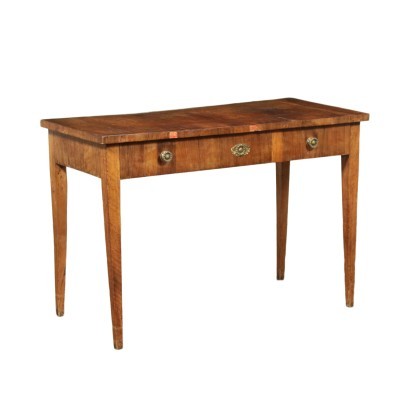 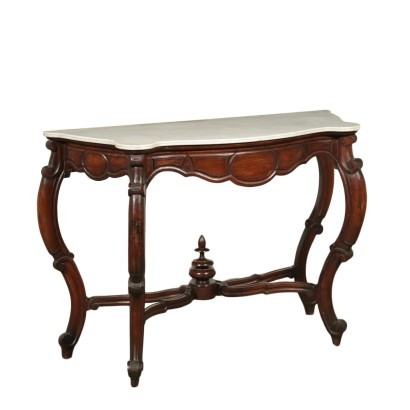 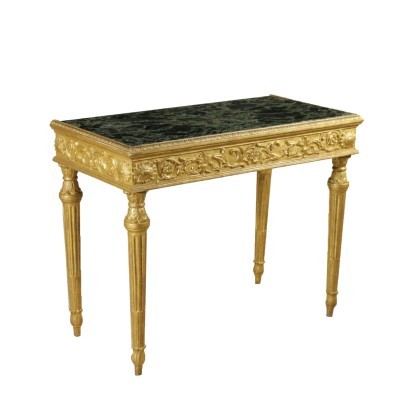 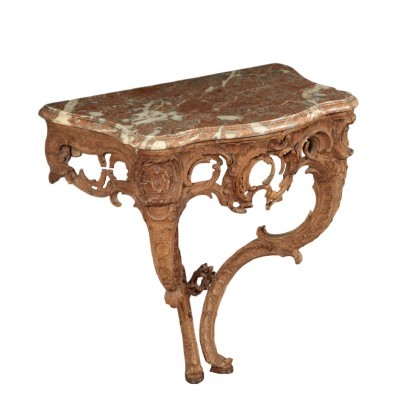 Rocaille carved linden wood. From a Piedmontese production, originally entirely lacquered and it presents some losses in the carving. It underwent some restorations; the spotted marble top is from a later date. 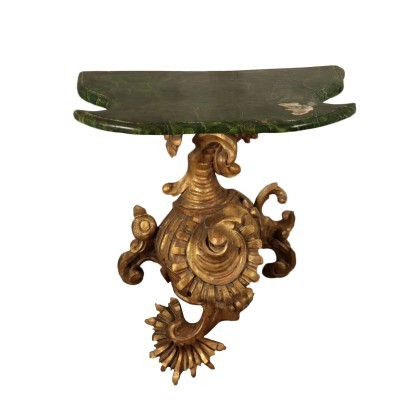 Made using part of a branze decorative setup; gilded and engraved linden to which a marbled surface had been added later. 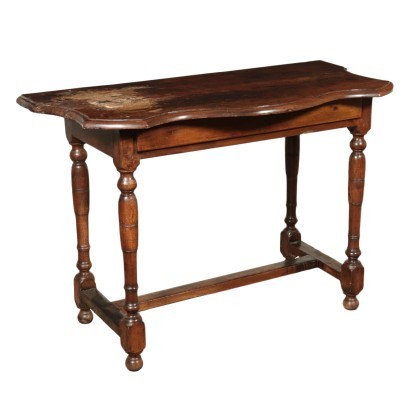 Barocchetto console, supported by turned legs connected by spindles, in the under-the-top band there is a drawer, the top is shaped. Walnut, it has been restored. 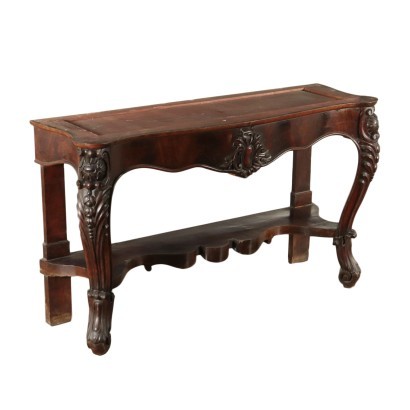 Luois Philippe console supported by 4 legs of which the rear ones are plinth-shaped and the frontal ones are carved with phitomorphic motifs and connected by a moulded surface. The frontal apron is framed and decorated with a central phitomorphic motif. Cathedral mahogany slab veneered with cherry interiors; missing marble top. 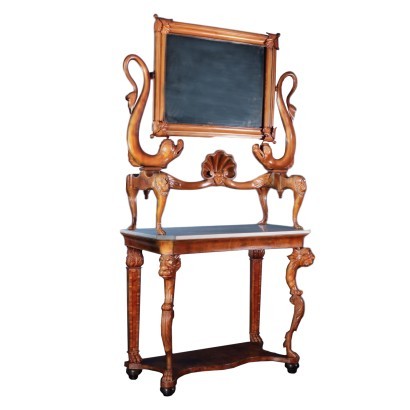 There are four uprights with beast-like feet set over a mixtilineal burl veneered top. The feet in front are curved and carved woth leaf-like spirals and the heads of monstrous animals. The nails and teeth are made of horn, while the eyes are painted; the uprights in the back are inlaid with carob tree wood. Those support the under-the-top band, veneered in feather. The white marble top supports a tilting mirror supported by four lion-like feet, with nails in horn and carved with leonine faces. The big shell in the centre and a pair of dolphins complete the structure of the console. 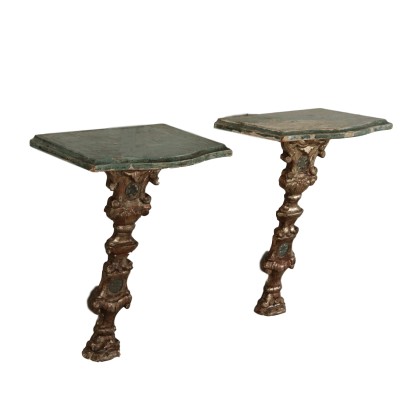 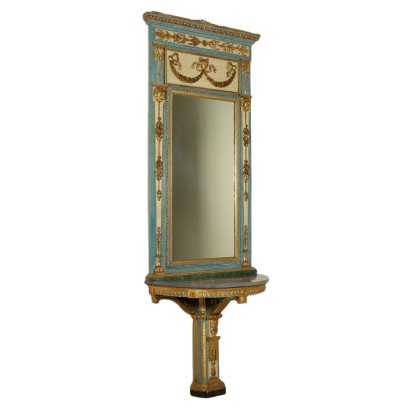 An elegant console table with single leg and three shelves holding the semicircular top with marble. High mirror with feral heads, garlands and Mercury's face in the middle. Richly carved with ropes, leaves and frames. Lacquered with two colors and gilded. Manufactured in Genoa, Italy, last quarter of the 18th century. 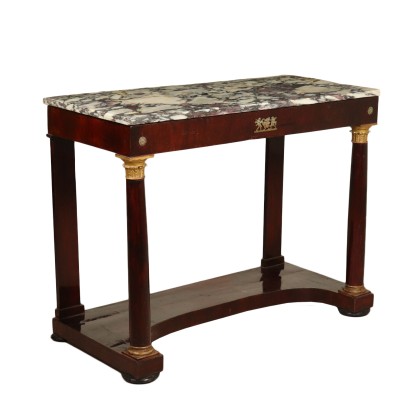 An elegant console table with columns with finely carved and gilded capitals leaning on a mixtilinear basement. Bronze friezes on the front. Marble top. Manufactured in Italy, early 19th century. 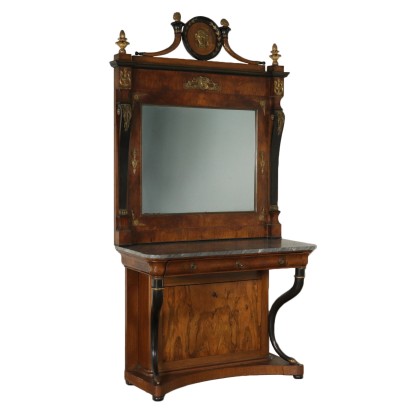 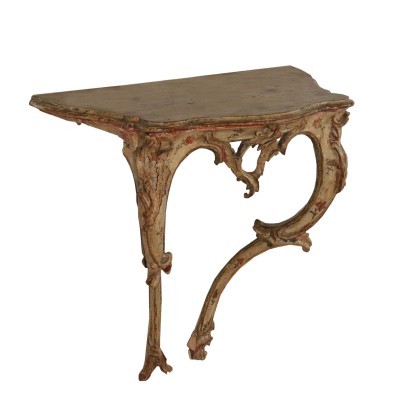