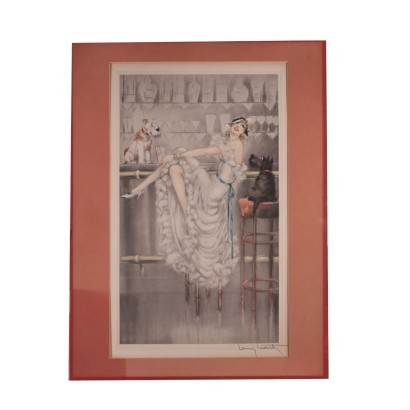 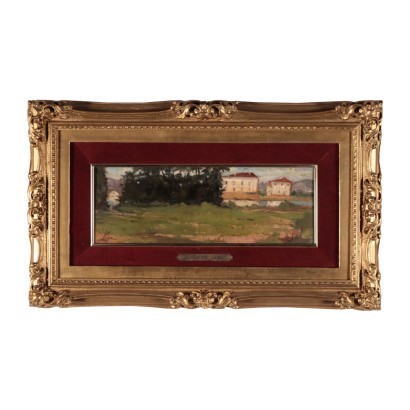 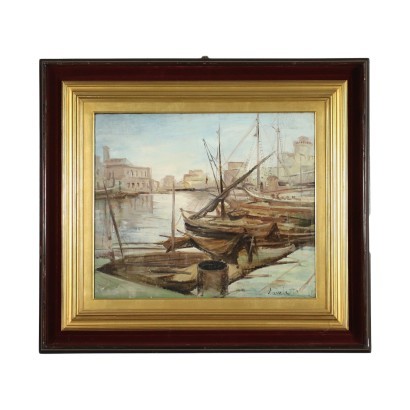 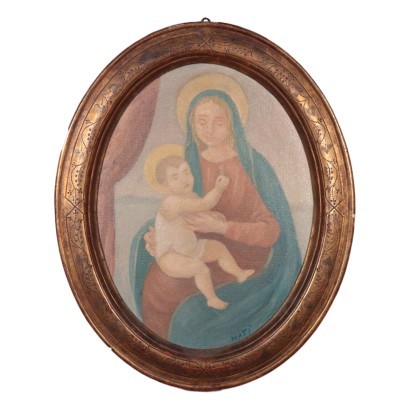 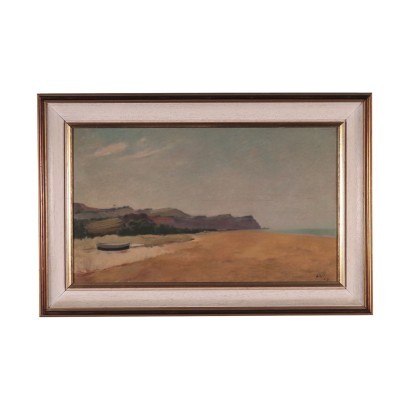 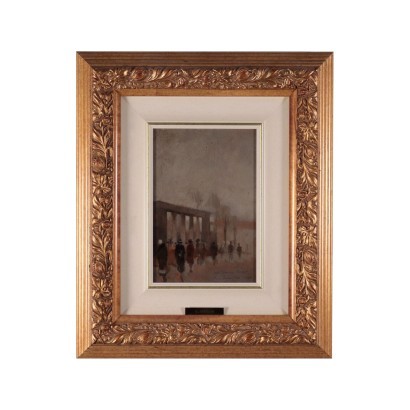 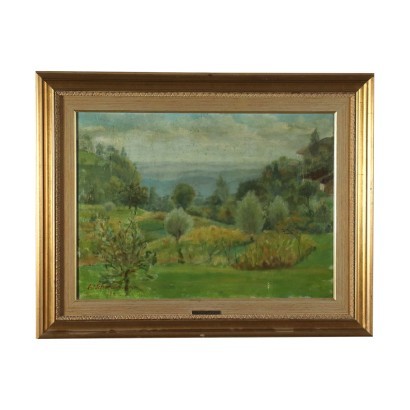 Oil on board. Signed A.Schereschewsky at the bottom right. On the back ther is the title and another signature" Aglaia Schereschewsky, widow.." It is a glimpse of the hills around Civiglio, a small village close to Como, that rises on a hill that faces the city and the lake. The signature recalls the polish post-impressionist artist Wladimir Schereschewsky (1863-1943) that lived for a long time in Italy and he had a daughter whose name was Aglaia born in 1893 and died in 1978. The painting come with frame. 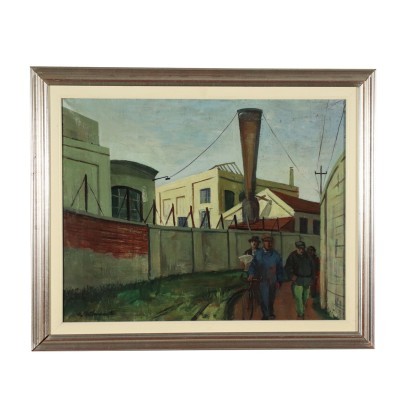 Glimpse of Factory with Workers

Glimpse of Factory with Workers

Oil on canvas. Singed at the bottom left. Another signature on the back of the frame. The glimpse of the factory acts as background to the group of outgoing workers and is part of the production after the 50s of Ampelio Tettamanti. The artist, originally from Laveno on Lake Maggiore was trained at the Brera Academy in Milan, after the war, during which he militated in the ranks of the Communist Party very close to the resistance movements, closely tied his artistic activity to the Milanese group and the homonymous Galleria "15 Borgonuovo", which gathered the protagonists of the Milanese realist movement. In the 1950s he began producing works inspired by the urban suburbs, the world of workers and the figures of labourers, and the social content in general, which from that time became recurring subjects in his work. The painting comes with frame 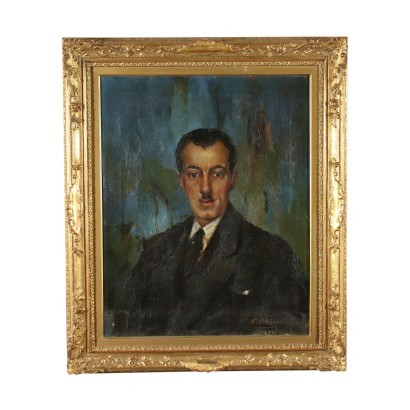 Oil on canvas. Singed at the bottom right. Enrico Felisari was born and raised in the province of Cremona but later he moved to Milan where he worked for several years; he privileged mostly paintings od human figures, portrais, heads' studies, making even a serie of anatomical boards that had been apprieciated by the ministery of education and used by the courses of painting at the Ambrosiana Academy where he taught 10 years. He also dedicated his production to landscapes and floral compositions as well as some subjects of sacral art. He used different techniques, from oil pastels to mixed medias, creating delicate works in interpretation and colors. The painting has light drops of color. Revival frame.

Oil on plywood. 1930s. Signed on the rear right corner. Ubaldo Oppi, born in Bologna, had a passionated life: he studied painting firstly in Vienna then moving around Europe stopping for a long time in Pris where he frequented Picasso; back in Venice he started to expose. In 1915 he left the front joning the alpine troops and fought until 1918 when he was deported to Mauthausen. During the first postwar he moved to Milan where, thanks to Margherita Sarfatti, he approached the movement of the Seven Painter on the italian 1900sto which he had been related for a short time. He took part to several Biennali in Venice and abroad and in 1926 e took parto to the Exposition on Italian 1900s at the Permanente palace in Milan. In 1928 he coverted to Catholicism and started including religious subjects in his prodution that until that time was mostly focused on figures and portraits. In 1942 he resumed service in the Army but soon he had to go back to Venic because of his health problemns and died on October 25th 1942. The painting in question is a genre subject, an old musician. Comes with coeval frame and needs to be restored. 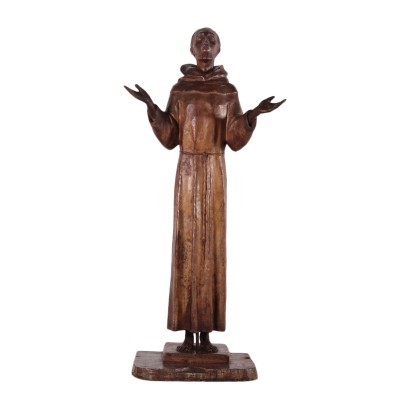 Patinated gypsum statue representing St. Francisco. Hardly readable signature of the artist under the base. 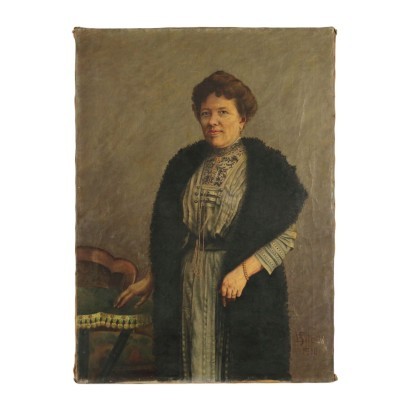 Oil on canvas. At the bottom right there is the signature of E.Siletti and date 1910. The big portrait of the lady is placed on a monochromatic background where we can see just the glimpse of an armchair and a small table on which the woman is resting her hand. Fair ocnditions. 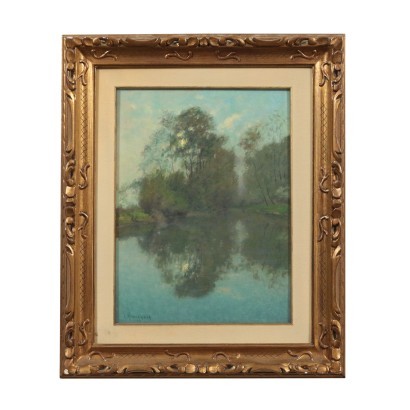 Oil on plywood. Signed at the bottom right. On the back there is another signature with date of exposing at a personal exhibition in 1975 at the Brolletto of Novara, is hometown. Comes with the invitation to the exhibition. The painting shows a landscape with a thick of trees reflectd by the frontal lake created by a delicate and suggestive play of colors in shades of blue and green. Displayed in frame. 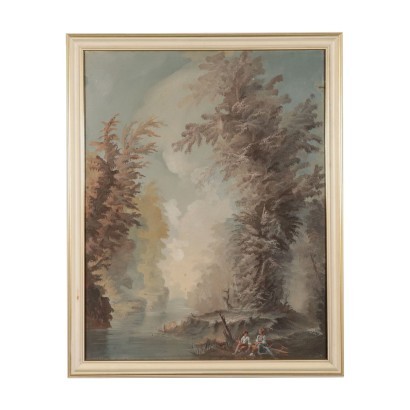 Tempera on plywood. The landscape show a blue night atmosphere with a full moon and the glimpse of a wood crossed by a river on which shore there is a couple of farmers talking. It is displayed in a revival frame. 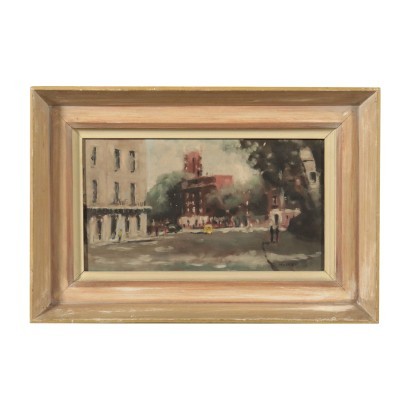 Oil on board. Signed at the bottom right. Label with title on the back that recalls the luxury london's district of Knightsbridge of which is represented a glimpse. The british painter Klitz is mostly known for his urban landscapes, expecially of London. The board is displayed in frame. 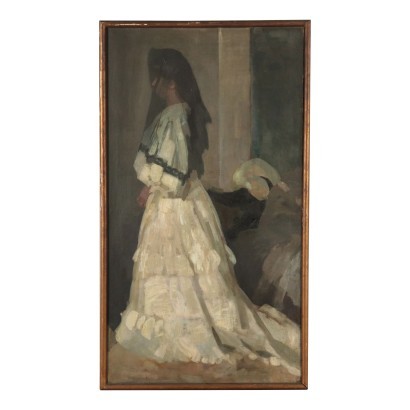 Oil on canvas. It is a large unfinished sketch, of excellent hand. The brushwork reminds of the paintings of Camillo Innocenti (1871-1961), Roman painter who was influenced by Divisionism and who manifested a pictorial preference for the world of women since the first years of 1900, including the popular world at first, then focusing on the one of the modern and elegant woman. Tha painting is presented in a coeval frame, with some defects. 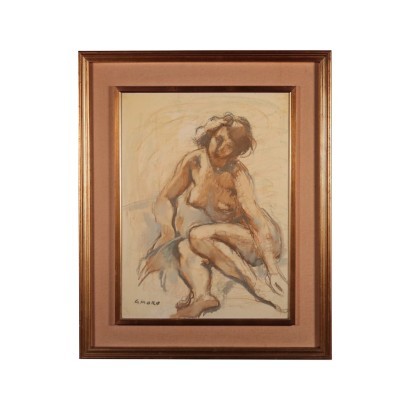 Mixed media on cardboard. Signed at the bottom right. Gino Moro was born in Milan where he studied at the Brera Academy and where is was artistically formed by taking part at exhibitions and exposin at several galleries becoming famous all over Italy and receiving offical recognitions. Since he started he dedicated himself to landscape, still life and female nude ( he got to teach at the Scuola Libera del Nudo at the Brera Academy). During 1960s and 1970s he got closer to a not figurative prodution, almost reaching the informal poetic with a serie of landscapes and glimpses of Lombardy and Pianura Padana. The painting comes with frame. 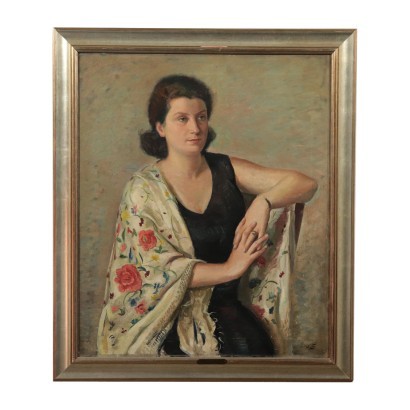 Oil on canvas. Signed bottom right. Portrait of a young woman in a black evening gown, enlivened by a big flower shawl that she wears draped on a shoulder. Piece by Alberto Salietti, an artist from Romagna, who, even if he developed almost all of his artistic career in Milan and Liguria, the painter, carver, mosaicist and fresco-painter, was still a reference point for painters from Romagna, especially between the two wars. After he moved to Milan with his family, he attended the Accademia of Brera until 1914. After the Venice Biennale in 1924, he became a part of the Novecento movement, which he became a secretary of in 1925. In 1926, he exhibited at the "First Exhibition of the Italian Novecento" and in 1927 he was one of the founders of the "Group of seven modern painters", with Funi, Sironi, Tosi, Carrà, Marussig and Bernasconi. As a portraitist and landscapist, Salietti, who drew from the post-impressionist, secessionist and modern influences, gave an original contribution to Italian art betweet the two wars, standing out for the joyous and optimistic adhesion to reality. The painting is framed. 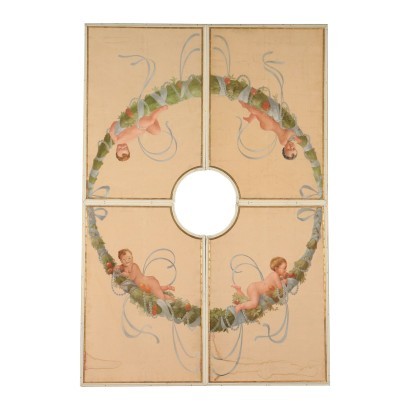 Tempera on canvas, Mid 20th century. The four large decorative panels are shaped to delimit a central hole for the chandelier. They are decorated with a leaf wreat motif, with fruit and ribbons, which, when the panels are mounted together, makes up a crown; there is also a putto, playing on the wreat, on every panel. The motif is of neoclassical taste. The whole decoration measures 350x240cm. 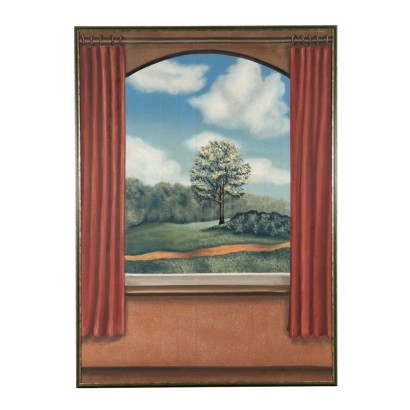 Oil on canvas. View of a verdant countryside crossed by a path and framed by two red curtains. Zanfagna name on the back but the author's name is unknown.