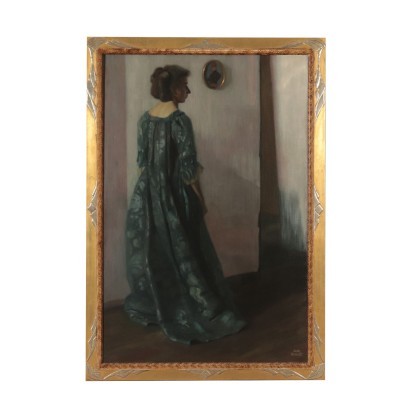 Oil on canvas. Signed bottom right. Additional signature on the framing in the back. Intense portrait of a female figure, portrayed from behind, with her face seen in profile, standing in an empty corner of the house, in front of a wall, decorated with only a small oval portrait. It is painted with broad strokes, with a minimal definition of the outlines, enhanced with the only colour range of light blues and greys, that fade the one into the others, almost without a solution of continuità. It is a large rare piece of the young and genious artist from Munich, famous for his activity as an illustrator and a graphic designer: during his short creative phase, Carl Kunst drew numerous posters, advertising stamps, illustrated books; the advertising stamps series for Roals Amundsen's trip to the South Pole and the series of postcards with Munich attractions are very popular. The painting is presented in a coeval frame.