Description:
A pair of stamped corner cabinets, two doors, serpentine front. Citronnier and rosewood veneer. Inlaid on the front with rosewood threads and gilded bronzes on the uprights and the basement. Tops made of breccia and bracket feet. Fir wood interiors. Both the corner cabinets have a stamping under the top: M. Criaerd. Manufactured in France, 18th century.

Notes historical bibliographic:
The stamps shall be used by the Parisian shop 70 years from Mathieu Criaerd and son; in those years can be attributed to the two corner cupboards, evidently influenced by Louis XVI taste. News are found on: Comte de Salverte, Les production du XVIII siecle, ed. 1975, p F.DE NOBLE Paris. 76-77

Louis XVI (1765-1790):
The style of Louis XVI, preceding by many years the advent to the throne of the sovereign from which it derives the name. The germ that triggers the phenomenon of neo-Classicism is to be found in the renewed interest for the classical culture due to the great uproar in Europe, aroused the archaeological finds brought to light in the excavations of Herculaneum and Pompeii, in 1738 and 1748. The same court of France, participates to the deployment of objects riecheggianti the ancient times since the last period of the reign of Louis XV. The renewed prevalence of the composure of the geometric shapes that characterize the furniture of the neoclassic period, was welcomed as a healthy antidote to the formulations as free and capricious taxation by the dictates of the Rococo, now degenerated into flashy exercises bizzaria. The imagination of the artist work loose interpretations drawn from the examples of the greco-roman world, etruscan or egyptian, from which only the metric architectural is revived with the strict observance. In this sense, it should be noted as only starting from the Seventies and Eighties in cabinet-making we are witnessing the sunset of the fioriturica pictorial inlay, in favour of models to the prevalence of ornate geometric. It is, therefore, to develop a furniture, characterized by an extreme elegance and manly austerity. In Italy, the style of Louis XVI, the natural spread, and in fact we could say that from a place to a type which is quite peculiar. The furniture tends in the norm since the Sixties and Seventies to adopt a linear structure and only in the decorative apparatus (usually fixed to the inlay) complaint attardamenti that still point to the trends of the era rocaille. Preferably he loves to use wood in brown color-clear, as the cherry and, in general, the lastronature of the fruit: it prefers to leave the inlay or to the threads chiaroscuro effects of greater tonal contrast, which is frequently used boxwood, walnut, rosewood, or bois de rose. Campania, Tuscany, Emilia and Lombardy are the regions that manage to express a high school of cabinet-making, which in some cases rise to european fame, with artists destined to link his name to the history of art, think of the example of Giuseppe Maggiolini. The Louis XVI Italian will always remain linked to the production of furnishing accessories, specifically geared to the type of inlay. It is size furniture well-proportioned, supported by the characteristics legs pyramid, truncated cone, clothes lastronature still thick, and the panels of the floor, the sides and panels centered by an elegant decor in valencia geometric or more elaborate iconography and archaeological, where the slot is only rarely comes to lap parts, such as the pillars or the grembiulina. The furniture of the most widespread is the comfortable and the table-console. 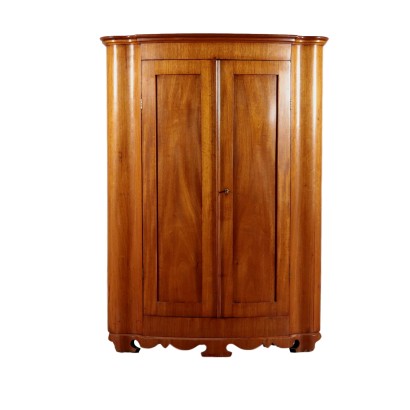 Corner demilune from the front in a rough line from the foot to the shelf. Has two doors. 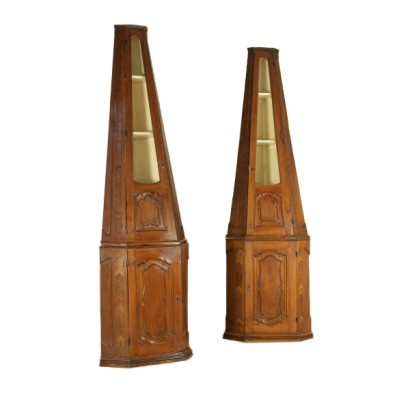 A pair of Baroque solid walnut corner cupboards with a broken line. In the lower part, doors with carved and framed solid wood panels. In the truncated pyramid shaped upper part, shaped doors with panels and original glasses divided into three parts. On the upper uprights walnut veneered striped panels have been applied, while in the lower part the panels are herringbone patterned. Coeval wrought iron locks and hinges. The two corner cupboards were probably part of a living room with boiserie. Manufactured in Italy (Lombardia) in the Mid 18th Century. 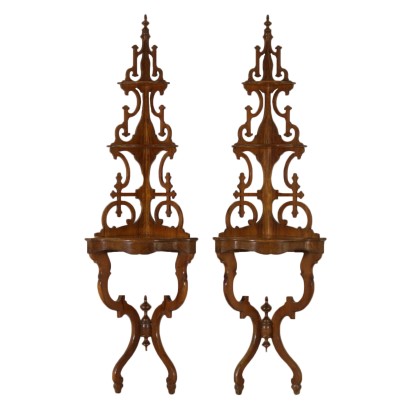 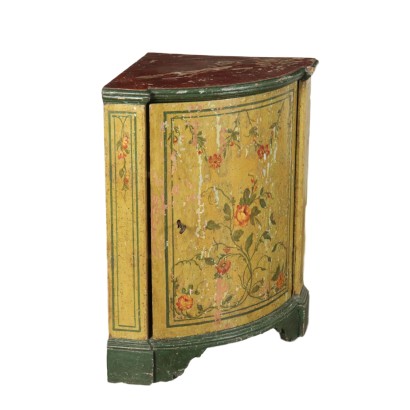 Corner demilune. Straight from the foot to the shelf has a door. Painted in a later period, with polychrome naturalistic. 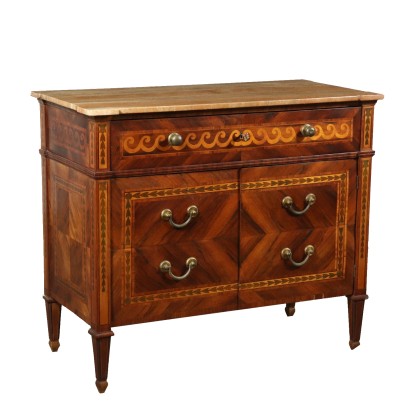 The cupboard was originally a chest of drawers amended at a later time. Two doors and a drawer under the top. Quadripartite slabs with geometrical inlays made of different species. Pyramidal feet. Manufactured in Italy, late 18th century. 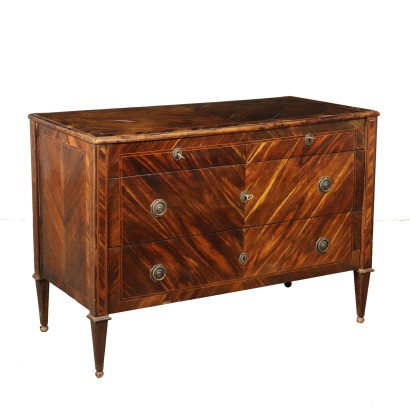 Chest of drawers plus two aligned under the top with thread and bipartite slabs. Pyramidal feet culminating with spheres. Bipartite slabs and threads on the whole surface. Manufactured in Italy, last quarter of the 18th century. 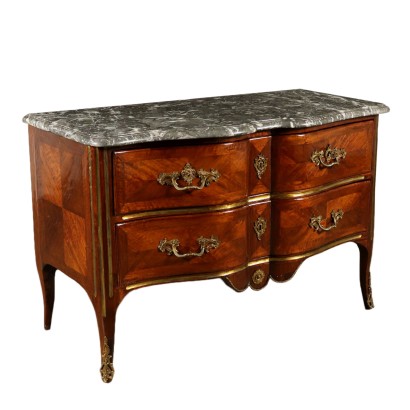 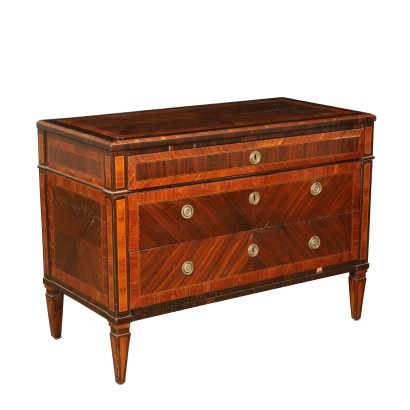 Neoclassical chest of drawers, two drawers in the middle enclosed in quadripartite slabs and another drawer under the top. Blunt pyramidal legs, rosewood quadripartite reserves and outlines and brazilian rosewood reserves. Manufactured in Italy, last quarter of the 18th century. 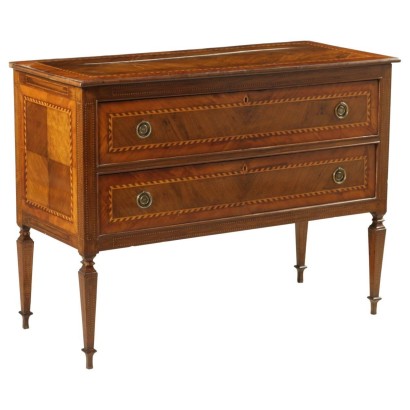 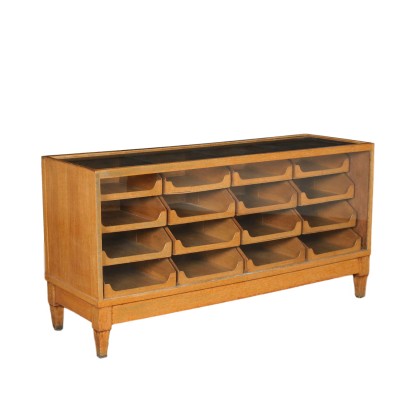 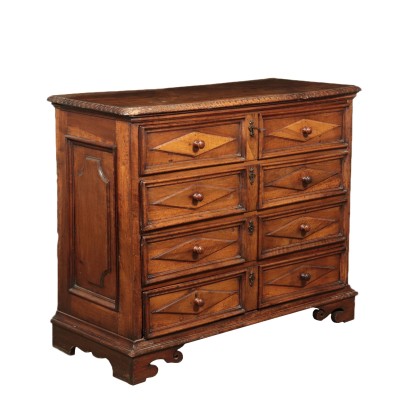 Chest of drawers with inlaid bracket feet. It has four drawers and framed tiles. The first drawer is drop-leaf. Compartment inside with six small drawers. The top has an inlaid frame with pattern. The knobs are turned. 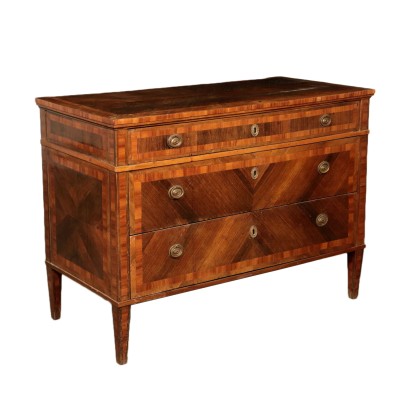 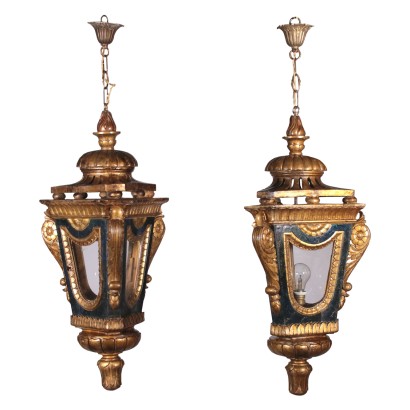 Pair of Lanterns in the Carved and Gilded Wood

Pair of Lanterns in the Carved and Gilded Wood

Lanterns the neo-classical style with a triangular section. Have small doors and sides with glass. Carved with scrolls and repeating motifs. 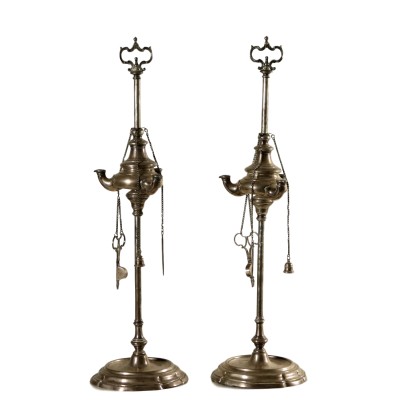 Pair of oil lamps made of molten shaped and chiseled silver. Brand of the silversmith at the bottom. Circular shaped base, shaped and ribbed shaft. The oil container has three spouts and a shaped handle with volutes. Three small chains hang through tweezers, candle-snuffer and flash suppressor. Iron inside. Manufactured in Tuscany, Italy, 18th century. 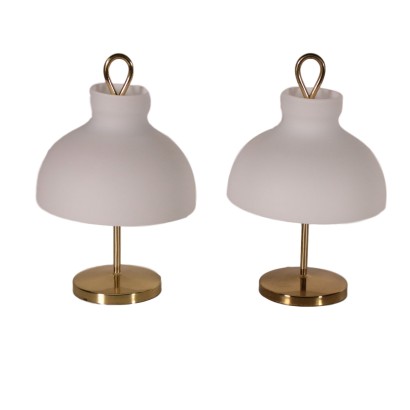 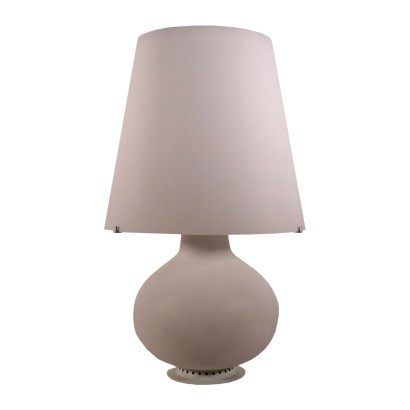 The Lamp By Fontana Arte

The Lamp By Fontana Arte 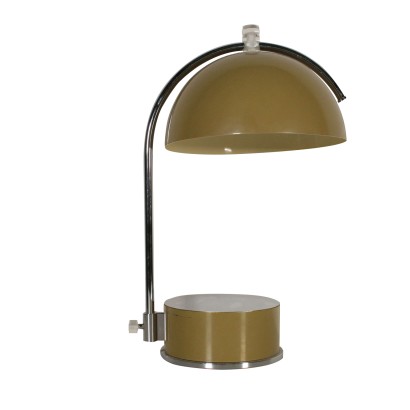 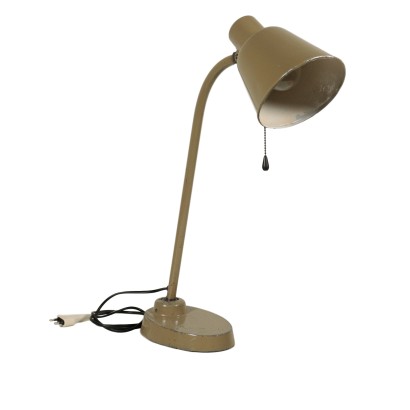 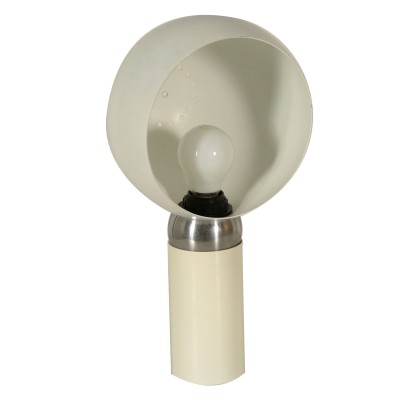 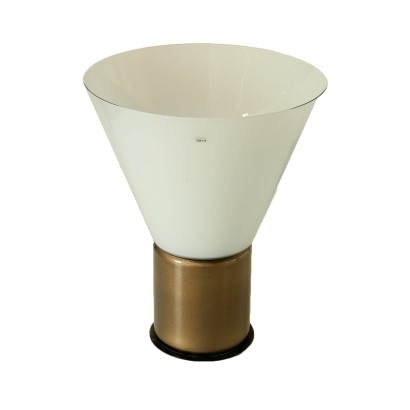 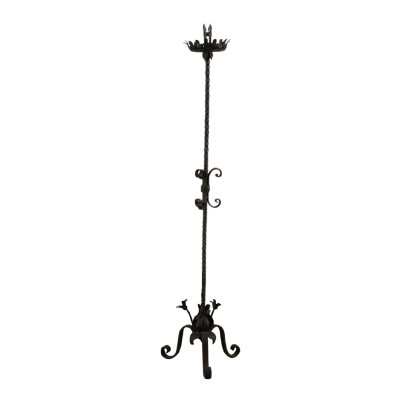 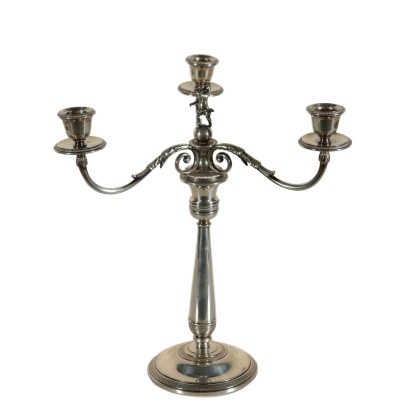 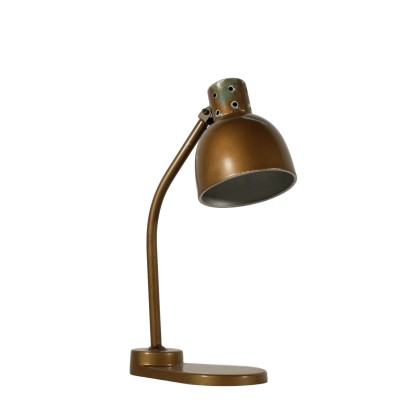 Adjustable table lamp with joint at the base, aluminum lampshade. 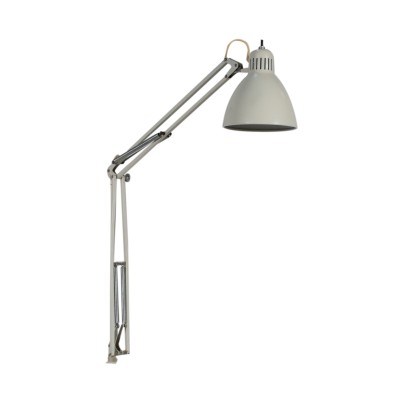